A new outbreak of bird flu has been confirmed in a back yard flock near Settle, North Yorkshire.

The UK’s Chief Veterinary Officer has confirmed H5N8 avian flu on 6 January, and a 3km Protection Zone and a 10km Surveillance Zone have been put in place around the infected premises to limit the risk of the disease spreading. The remaining live birds in the small flock of chickens and ducks are being humanely culled.

Meanwhile, in Lincolnshire, the protection zone put in place around the turkey farm near Louth where H5N8 was confirmed in December has now been lifted. The surveillance zone restrictions continue to apply, however. 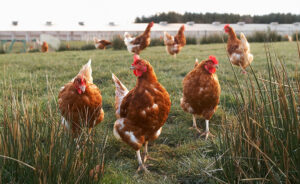 Poultry keepers are now required by law to house them or otherwise keep them separate from wild birds. This requirement is in force until 28 February 2017. Defra has also banned gatherings of poultry across the UK.

Chief Veterinary Officer Nigel Gibbens said: “We have taken swift action to limit the risk of the disease spreading. Restrictions are now in place around the affected premises and a full investigation is underway to determine the source of the infection.

“This finding in a backyard flock shows how essential it is for all poultry owners, even those who just keep a few birds as pets, to do everything they can to keep them separate from wild birds and minimise the risk of them catching avian flu via the environment.

“This means keeping birds in a suitable building where possible, and taking precautions such as putting up netting, keeping food and water inside and disinfecting footwear and equipment after contact with birds.”