Poultry keepers in Northern Ireland must keep their birds indoors until 16 March now, after the Department of Agriculture, Environment and Rural Affairs (DAERA) decided to extend its avian influenza prevention zone (APIZ).

Announcing the extension to the AIPZ, the Chief Veterinary Officer, Robert Huey said: “Within the Prevention Zone, all keepers of poultry and captive birds, including small backyard flocks, are required to keep their birds indoors, or take appropriate steps to keep them separate from wild birds.  Failure to take these steps could have very serious implications not only for the keepers themselves, but for any of their neighbours that keep poultry, including commercial poultry premises in the area.

“Should there be an outbreak in any poultry flock, including a backyard flock, not only will the birds die from the disease or be culled to reduce the risk of spread, but it will also be necessary to set up a 10km control zone around the infected premises, which will seriously impact on movement of poultry in the zone for some time and will also have a serious impact on our ability to export poultry products”.

Huey continued: “Failure to comply with the housing requirement is also an offence and could lead to prosecution.

“While there still have been no cases of H5N8 in Northern Ireland, we should not be complacent given the ongoing disease situation elsewhere.  The AIPZ is in place as a precautionary measure to help reduce the risk of infection from wild birds.  Keepers who are concerned about the health or welfare of their flock should seek veterinary advice immediately.”

Commenting on DAERA’s decision to extend the Avian Influenza Prevention zone, the UFU’s poultry chairman, Tom Forgrave said: “The UFU supports DAERA’s approach, given the risk posed by avian influenza to the poultry sector.  DAERA consulted the UFU on the next steps for the Prevention Zone, and with the proximity of recent outbreaks in GB and ROI, an extension is prudent to protect our industry.”

Forgrave said he recognised that the length of this extension will cause concern with UFU members with free-range enterprises.  He said the UFU was discussing this with DAERA, the NFU and the BEIC to gauge the impact this would have on the free-range industry if it is extended beyond the March 16.

“In the interim, I would urge all our members to continue to practice enhanced biosecurity at all times, and to be vigilant for any signs of disease. I would also recommend that those who keep small numbers of hens, geese or ducks follow DAERA’s advice to keep these birds housed or separated from wild birds.  This group has an important role in reducing the risk of AI to their own birds and the commercial poultry sector. Ultimately the biggest factor in deciding whether to lift the Prevention Zone will be the absence of the disease in Northern Ireland.  Every poultry keeper has an important role to play in achieving this goal,” he said. 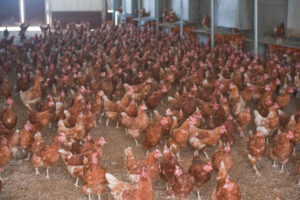