Noble Foods and Cranswick have been recognised for high standards in reporting their farm animal welfare policies and practices.

Both companies have been ranked as ‘tier 1’ firms in a newly published report, Business Benchmark on Farm Animal Welfare. Noble Foods has retained its tier 1 rank from last year, whereas Cranswick has moved up from tier 2.

Now in its fifth year, the BBFAW provides an annual review of how 99 of the world’s leading food companies are managing risks and opportunities associated with farm animal welfare.  The report, which is compiled in collaboration with leading animal welfare organisations Compassion in World Farming, World Animal Protection and investment firm, Coller Capital, reveals that companies are paying increased attention to farm animal welfare within their supply chains.

Veli Moluluo, managing director of Noble Foods’ consumer foods division said the company was pleased to retain its tier one ranking: “Our commitment to continually seek to improve the welfare of animals on our farms, or those owned by our contracted farmers, is absolute.  To be recognised as a consistent leader in this field since the BBFAW report was launched in 2013 is very pleasing, and the interest from customers and consumers alike is testament to the growing profile of both BBFAW and the subject as a whole.” 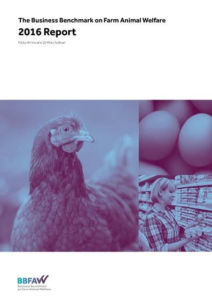