The rising cost of household groceries means shoppers are increasingly turning to supermarket’s own-label products at the expense of branded goods, according to Nielsen retail data released today.

Over the last three months, consumer spend on supermarket’s own-label products rose 5.5% year-on-year, nearly five times the growth in spend on branded products (up 1.2% year-on-year). The average increase in sales across all grocery products was 3.5%.

“The return of inflation means shoppers are increasingly turning to supermarkets’ own-label products to help manage their weekly grocery spend,” said Mike Watkins, Nielsen’s UK head of retailer and business insight. “Own-brand sales are growing across all major food retailers but fastest at the discounters – Aldi and Lidl – and at the Co-operative, Iceland, M&S and Tesco.”

Watkins notes that the supermarkets are increasingly reluctant to pass on all of the rising cost of groceries to shoppers because the industry remains “very competitive.” He said: “Looking at what shoppers are putting into their baskets suggests food retailers are helping shoppers manage the impact of inflation by offering different ranges of own-label alongside brands across many categories.”

In addition, the proportion of consumer spend that went on items on promotion rose slightly to 28% with roughly 60% of these promotions being price cuts. This “resonates well with shoppers but may also indicate that the industry is leaning a bit more on short-term price cuts to help smooth inflationary price increases.”

The return of inflation means the market has now been in growth for over 12 months, with all four of the biggest players experiencing year-on-year growth in the four weeks ending 9 September 2017. It was also their fourth consecutive twelve-week period of growth and they “look set to stay in growth for the rest of the year.” 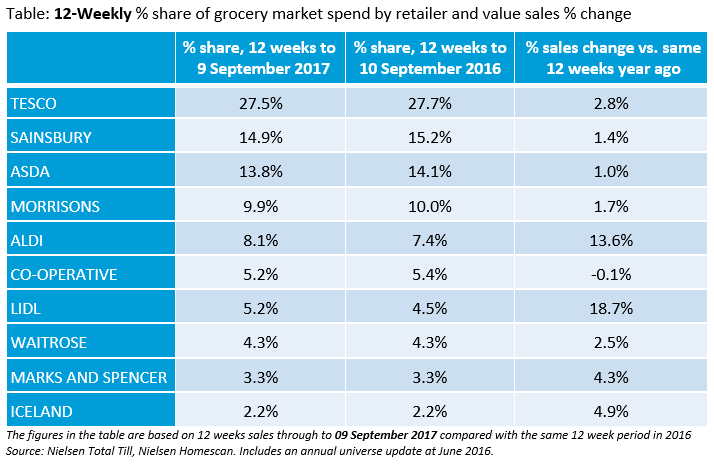 Despite the positive outlook, Watkins said that “the big supermarkets will need to keep on their toes” because nearly two-thirds of households now visit a discounter at least once every three months, partly due to the raft of new store openings. “Consequently, the three main challenges are: to grow spend per visit faster; to encourage frequency of visit for different shopping missions and; to have inspiring media campaigns that help build loyalty through to the end of the year and the all-important Christmas shop.”
Share. Facebook Twitter LinkedIn Email
Previous Article2 Sisters uses robots to process its accounts
Next Article Tesco chief announces plans to half food waste in speech in New York