A pioneering Dutch farm has produced what is believed to be the world’s first carbon-neutral eggs, but is the project more than just a pipe dream and could it work in the UK?

Sustainability has long since stopped being an attractive adornment for farm businesses and is now a central plank of most suppliers’ mission statements, but one project in the Netherlands has cranked the volume on its sustainability efforts up to 11 by producing what it claims is the world’s first carbon-neutral eggs.

Kipster is the brainchild of Dutch sustainability pioneers Maurits Groen and Ruud Zanders, who together with farmer Styn Claessens and entrepreneur Olivier Wegloop have established what they believe is a unique egg-production concept that could prove a model for future industry. It’s turning heads and attracting interest across the world, but can it be considered a true commercial concept and could we be seeing similar iterations in the UK in the near future?

Established near Venray in the eastern Netherlands, Kipster combines a raft of ideas together with a transparent model that its founders believe offers the public an unprecedented level of trust in its final products. Kipster’s concept centres around what it dubs ‘closed-loop farming’, with the key plank being that it is not using agricultural land and nourishes its chickens with a specially-developed feed made from leftovers from bakeries, for example. While that means Kipster cannot call its products organic, Groen and Zanders claim the carbon footprint of a kilo of its feed is 50% smaller compared to standard chicken feed, adding that the fact its hens lay white eggs gives it a further five per cent lower footprint over those laying brown.

Animal welfare is to the fore at Kipster, but it is not an entirely open, free-roaming setup – it is instead an attempt to replicate a forest environment, with wood, daylight, fresh air and free space, but the park is covered with a net to reduce the threat from other birds and animals. The practice of gassing chicks is addressed by raising male chicks on an organic farm, before culling them at 15 to 17 weeks and selling their meat as rooster burgers.

Groen has openly admitted that financing was the biggest single challenge to getting the project off the ground, and that securing a contract with Lidl in the Netherlands – which exclusively buys all its eggs and rooster meat – was key in gaining bank support. Indeed, the partnership with Lidl is crucial, with Groen stressing that Kipster receives a fair price from the German discounter for its eggs.

Sustainability pervades every aspect of the Kipster business, right down to the blue boxes used to sell the eggs. Described as the most sustainable egg box available – a fact that has earned it a spot at London’s Museum of Brands – the box is made from potato starch, cellulose fibre and water, and is said to have a carbon footprint 90% lower than standard versions. 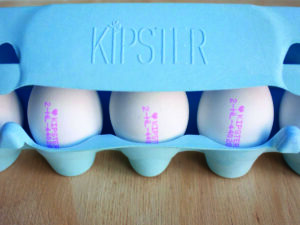 Other innovations include reducing fine particle emissions to a minimum using techniques found in hospitals and garages, generating its own power using over a thousand solar panels, and blending the design of the farm with the natural landscape.

The project has caught the eye of poultry specialists across Europe, and several study tours have already visited from the UK. Colin Ferguson, chair of the NFU Scotland Next Generation group, was among 15 Scottish Enterprise rural leaders and five Rural Youth Project delegates to visit Kipster in May, as part of an urban and renewal learning journey to the Netherlands that took in a range of agricultural initiatives. Ferguson says he was struck by the way the farm was engaging the public in a meaningful and transparent way. “Kipster has a 24hr viewing room of their chickens, which is a new way to educate the public,” he points out. “The consumer will always purchase cheap food; it is our responsibility as farmers to share our stories and add the value to the supply chain.”

Rural Youth Project founder Jane Craigie adds that such projects allow the rural and urban communities to come together and understand each other. “The Dutch have a real aptitude for harnessing the power of storytelling to connect with consumers and they’re constantly pushing boundaries when it comes to agriculture and business,” she said. “So many fundamentals of what the Dutch are doing are within reach of young people looking to build business or enterprise in rural communities.”

NFU poultry adviser Aimee Mahony also visited Kipster as part of a Poultry Industry Programme study tour, and she was impressed by the number of different stakeholders involved in the project’s design, from welfare bodies and the general public to experienced producers themselves, pointing out that getting such groups on board from the beginning is a real advantage. She also cites the visitor centre as a key aspect of engaging and educating the public on where their food comes from.

Mahony doesn’t see it as all plain sailing though, at least in terms of getting such an initiative off the ground. She observes that while it’s great to have so many stakeholders involved, that will inevitably mean varying levels of experience in managing poultry, as one person’s standpoint may not necessarily be the best for bird welfare. And then there’s the issue of prohibitively high startup costs, with the project estimated to be as much as three times as expensive to establish as a conventional system.

Mahony doubts whether such a system could be a success in the UK, and doesn’t think it would be commercially viable in its current form. “I’m not aware of any moves to do anything similar here,” she says. “For this to happen we would need a guarantee that consumers and retailers were willing to pay for the product to ensure the model was commercially viable. I’d also be cautious of consumer acceptance as the eggs would be classed as barn and there is little marketing and/or consumer understanding at present around barn, so would people be willing to potentially pay more for the eggs from this system?”

The visitor centre presents a great opportunity to educate people and is something UK producers would do well to adopt, she adds, but as a ‘one-off’ system it is not representative of the commercial egg industry as a whole, which presents its own challenges. And it’s impossible to get away from the issue of hard cash. “Undoubtedly the cost to set up such a unit seems to inhibit the ability to replicate, at present, such a concept in the UK,” she says, summarising the views of the Poultry Industry Programme participants.

Groen is not put off, however. He says Lidl’s long-term support makes the project viable, and adds that far from worrying about imitators, he would be thrilled for others to copy the Kipster concept, revealing that there has been plenty of interest from abroad, particularly in countries such as the US where animal welfare has been lower on the agenda.

There may not be a complete replica of the farm arriving in Britain anytime soon, but without doubt its pioneering approach may offer others the chance to cherry pick the best aspects and improve the overall sustainability of the industry.

Going Dutch: How the agriculture industry is doing things differently in the Netherlands

Another new Dutch poultry project, Rondeel  is described as “a way of socially responsible poultry keeping and producing under the highest animal welfare and environmental standards.” Built on a roundhouse design with a focus on low-impact farming, responsible and traceable production is at the heart of the approach, with viewing galleries and webcams allowing the public to see into the site.

US egg production down 1% in March