The government has commissioned the first systematic review of our food and farming system for 70 years. At the Oxford Farming Conference, farmers heard for the first time what it might look like

“Our scope is broad, you might think insanely broad,” said Henry Dimbleby, as he spoke publicly for the first time about the National Food Strategy. “In the dark hours just before dawn I sometimes think about that too.”

Dimbleby – the co-founder of the Leon restaurant chain – has been tasked by the government with devising the first National Food Strategy in this country for 70 years. At the Oxford Farming Conference on 8 January, he laid out some of the thinking that could shape the strategy, and the implications it could have on British food production. 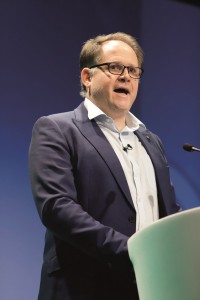 He is right to call the scope broad. “We have been asked to set out what needs to be done – across all departments of government and in society more broadly – to build a robust food system that provides good affordable food to everyone; restores the environment; maintains our countryside; brings good jobs to our communities – rural and urban; and stops making us sick.

“We need to create a food system that we would be proud to leave our children,” he said.

After praising the creativity and determination of farming pioneers such as Norman Borlaug, whose work developing hardy wheat strains helped eliminate food shortages and starvation in large swathes of the world during the twentieth century, Dimbleby set out what he believed were the main problems today with our food system that needed to be tacked.

“Farmers saved billions of people from starvation in the Green Revolution,” he said. “Infant mortality plummeted, life expectancy rose and for first time in agricultural history the increase in calories outstripped land being farmed. But the solution to one problem created others. The obesity epidemic has been coming towards us like a tidal wave far offshore and we need to do even more to tackle it.”

An abundance of food is making people sick, he said, showing slides to demonstrate average body weights increasing year on year since the 1950s.

Another key area of focus is farming using methods that can help enhance the environment and sequester more carbon. The government has already embedded that in its agriculture bill, which will return to parliament later this month, through its system of ‘public money for public goods’.

Dimbleby was clear though that if UK farmers were required to set a gold standard, imported food must also meet those same standards. “We cannot only consider the environmental impact of food we produce in the UK but must also apply the same standards to food import,” he said.

“What is the point of doing the enormous amount of work required to create a net-zero farming economy here, if we then just import that carbon from other countries?

“The same goes for animal welfare, biodiversity, and environmental pollution. We cannot only consider the externalities of food we produce here but must apply the same standards to food imports. It would be wrong to create a gold-standard for farming in this country and then incentivise those harms overseas in the form of lower standard food imports.”

The cost of food

We also need to have a more nuanced discussion about the cost of food, Dimbleby argued. “The argument is often poorly framed. On one side, you have people who say that our food is too cheap; that the price we pay at the supermarket does not represent the true cost to society as a whole. In some cases – you might point out – it doesn’t even cover the farmers’ costs.

“On the other side, people argue that increasing the cost of food would make it even harder for the least affluent to put food on the table. These are two separate issues and should not be conflated. We need to work out what the true cost of food is and separately understand why some people struggle to afford sufficient food. I am not saying that food prices should or will rise; only that environmental degradation or wide-spread ill health is not a viable long-term solution to the problem of poverty.”

He also raised the issue of how meat has become a controversial area of debate. Talking about meat has become a “dialogue of the deaf,” he said. The National Food Strategy must clearly set out the impact of different production systems, he said. “We need to understand the role ruminants play in soil health, and issues such as the impact of soya fed to poultry. We hope to bring a little more light and a little less heat,” he added.

Dimbleby ended by making the case for farmers being at the heart of the conversation.  “If we can align behind a common vision – as, for our children’s sake, we surely must – we can pivot this system that has been so good at delivering sustenance, pleasure, jobs, and (for some!) profit, to one that does that while simultaneously restoring and enhancing our environment, sequestering carbon, and that stops making us sick.

“All this may sound daunting. But this is a time of enormous opportunity. In a low-carbon world, we will require much more from our land – we will need it not only to provide food, but materials and renewable energy. We will need it to sequester carbon. Rather than being only a victim of floods, farmers will be paid to help mitigate against them. And to provide different habitats for nature.

“These additional demands will inevitably provide opportunities for farmers – the traditional stewards of the land, who know its frailties and capabilities best. And if Britain can lead the world in this effort, we will also be able to benefit by exporting that knowledge abroad.”

Timescale for the National Food Strategy

The National Food Strategy will publish its findings in the summer of 2020. In the autumn a ‘citizen’s assembly’ comprising randomly selected members of the public will meet for four consecutive weekends to debate the findings and put forward its own suggestions.

The Government has committed to responding with a white paper six months after publication. It has also asked Henry Dimbleby to review progress 12 months after that.

The session at the Oxford Farming Conference was hosted by the BBC’s Evan Davis and included a panel debate with Denise Bentley, co-founder and CEO of First Love Foundation; Roger Whiteside, CEO of Greggs, the largest bakery chain in the United Kingdom and; Ian Mitchell, Director of Effective Development in Europe at Centre for Global Development.

Roger Whiteside of Greggs was asked about the role his business had in tackling obesity. “We are in the eye of the storm in the obesity crisis,” he said. “It’s something I wrestle with. How do you find the way through the maze that you sell things that if eaten to excess contribute to obesity crisis? It’s difficult. Consumers won’t be dictated to. You have to work with what consumers want.”

Whiteside argued the only way forward was with new laws on food formulation. “The reason there’s no chain of healthy food shops is because there’s no demand for it. We would welcome more regulation.”

Denise Bentley, whose charity First Love Foundation works in deprived parts of London with food bank recipients argued a National Food Strategy must work across government, including with the Department of Work and Pensions that issues welfare benefits.

The vast majority of people she helped were going hungry because of problems with the benefits system. “Those people are not part of this conversation,” she said. “They are just in survival mode. There are 300,000 people in Tower Hamlets, and the area has 57% child poverty.”

In a recent session, she helped a man who explained his benefits had been suspended because he missed a job centre appointment while ill in hospital. He had been surviving on bread and water for months. “The people we’ve been helping don’t have a seat at the table,” she said. “The reason I’m here is to say why people have been plunged into poverty. There are really horrible health outcomes with people who are long term dependent on food banks.”

Ian Mitchell, Director of Effective Development in Europe at Centre for Global Development, a thinktank, argued in favour of a tax system that rewarded food producers who lowered their carbon footprint.

He suggested changes in the VAT system could then be redirected to help with the serious problem of food poverty, described by Denise Bentley. “I would encourage people to think radically,” he said.

May 16, 2022
We use cookies on our website to give you the most relevant experience by remembering your preferences and repeat visits. By clicking “ACCEPT ALL”, you consent to the use of ALL the cookies. However, you may visit "Cookie Settings" to provide a controlled consent.
Cookie SettingsREJECT ALLAccept All
Manage consent