During March, soya meal markets recorded elevated levels of support in the face of coronavirus. According to data from AHDB, global demand for feed increased, while global availability fell. Countries that had first entered lock-downs experienced large-scale logistical disruptions.
Recently, with global soya supply at a high, soya meal prices have since retraced back to pre-March levels, according to a briefing writen by Alex Cook, trainee Analyst, AHDB Market Intelligence. This has provided some respite for the UK livestock industry, which makes use of imports for protein feed sources. 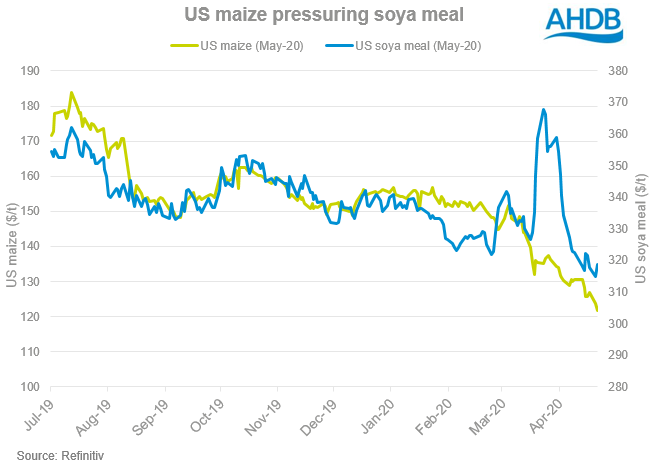 Panic buying of food supplies at the end of March resulted in many countries increasing imports of animal feed supplies, particularly soyabeans and soya meal to supplement feedstocks. Reports of logistical delays at Argentinian ports increased global supply concerns and soya meal prices to a point. Brazilian exports of soyabeans reached record levels for March at 13.5Mt, benefiting from the reduced value of its currency.
However, there remains long-term support for soya meal. With China beginning to open up again onto the world stage, the country is resuming the recovery of its pork production.
From a UK view, this sentiment has helped drive the direction of delivered (48% Pro) soya meal prices. On 27 March, prices were quoted at £375.00/t for May delivery into Liverpool. As of 17 April, prices had declined £48/t to be quoted at £327.00/t for May delivery into Liverpool.