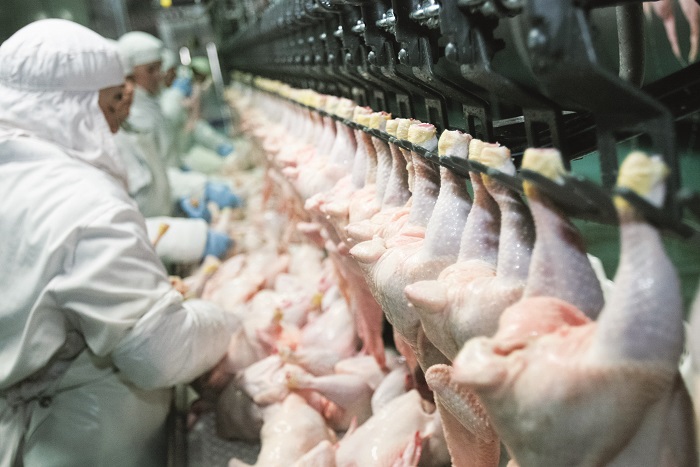 The Confederation of British Industry (CBI) has thrown its weight behind meat businesses who are warning about the chronic lack of available labour.
In a speech to the Recruitment and Employment Confederation’s (REC) Annual Conference, the crossbench peer Lord Bilimoria said the food & drink industry was among the worst affected by the current labour market shortages, which have forced the poultry industry to scale back production 10% since Easter.
Lord Bilimoria identified a combination of factors, ranging from the paradoxical effects of the job retention scheme to EU workers not returning to the UK amid the COVID crisis. He said government should immediately update the shortage occupations lists for roles including butchers  to protect the competitiveness of the UK’s economic recovery. Firms must also continue to strengthen inclusion and invest in skills and automation, the long-term solutions to shortages, he said.
Outlining the challenge from labour market shortages, Lord Bilimoria said: ” As lockdown restrictions lift, we’re also seeing a surge in the demand for labour – and we know many businesses are already struggling to recruit.
“The latest REC/KPMG report shows overall candidate availability during the past quarter declined at its quickest rate since 2017.
“It’s a big challenge, not just for individual businesses, who can’t find the people they need, but also for our longer-term economic recovery.
“We’ve got a perfect storm of factors coalescing. During the pandemic, many workers from overseas left the UK to return home – hitting the UK’s hospitality, logistics, and food processing industries particularly hard.
“The UK’s immigration system is also a barrier to hiring people from overseas to replace those who may have left.
“And the furlough scheme ─ a lifeline, for millions of employers and employees alike, is becoming a strange paradox for policymakers.
“The more successful the Job Retention Scheme is – and it has been very successful so far – the smaller the talent pool for businesses, here and now.
“In food and drink, where a leading food supplier told us they’ve seen EU workers leaving during the pandemic – and despite offering apprenticeships, they can’t attract new workers to fill the gaps.
“And of course – on top of all this, the UK’s longstanding skills shortages haven’t gone away.”
Businesses must first help themselves, Lord Bilimoria said: “As a starting point, this means opening up new routes into business, whether it’s a new apprentice scheme or widening access for candidates with technical qualifications.”
Businesses can tackle labour shortages by investing in innovation and technology, he said. And employers can look to recruit from a wider talent pool, by working with organisations and charities – like Mind, Business in the Community, Movement to Work, or DisabilitySmart.
“By considering those who might otherwise be overlooked in the world of business – based on their gender, ethnicity, or background, or supporting the CBI’s own campaign – ‘Change the Race Ratio’ to increase ethnic minority inclusion across business.”
Government can act too, Lord Bilimoria said: “We’ve identified two big things the UK government can do straight away, to help make sure the UK is open for business, and to get our economic recovery on the right track.
“First – we need government to immediately update the ‘Shortage Occupation List’. Last year – in September 2020 – the Migration Advisory Committee recommended that we add certain roles to that list. Butchers, bricklayers, and welders for example. Today, almost a year on, we worry those are exactly the same sectors facing shortages now.
“Businesses would also welcome a commitment to review the list annually, to keep it responsive to the ebb and flow of skill demands across the whole of the UK’s economy. And where there are clear, evidenced labour shortages, businesses should be able to hire from overseas.”