Slower-grown broiler chickens are far less environmentally friendly and are a less sustainable option than standard birds, a new study released by the US’s National Chicken Council has highlighted.

The study was commissioned to provide a counterpoint to claims by animal welfare organisations concerned about rapidly growing breeds of poultry because of the potential impact on animals’ health.

The NCC report details the environmental, economic and sustainability implications of raising slower growing chickens, revealing a sharp increase in chicken prices and the use of environmental resources – including water, air, fuel and land.  NCC also calls for more research on the health impact of chickens’ growth rates, to ensure that the future of bird health and welfare is grounded in scientific, data-backed research.

“The National Chicken Council and its members remain committed to chicken welfare, continuous improvement and respecting consumer choice – including the growing market for a slower growing bird,” said Ashley Peterson, senior vice president of scientific and regulatory affairs. “However, these improvements must be dictated by science and data – not activists’ emotional rhetoric – which is why we support further research on the topic of chicken welfare and growth rates.”

In assessing a transition to a slower growing breed, the environmental impact is an important component often left out of the equation.  If only one-third of broiler chicken producers switched to a slower growing breed, nearly 1.5 billion more birds would be needed annually to produce the same amount of meat currently produced – requiring a tremendous increase in water, land and fuel consumption.

The report claims this would require the following extra resources:

Additional water needed: 1 billion additional gallons of water per year for the chickens to drink (excluding additional irrigation water that would be required to grow the additional feed).

There are also economic implications, including rising food prices.

The organisation said it supported more research. “We don’t know if raising chickens slower than they are today would advance our progress on health and welfare – which is why NCC has expressed its support to the US Poultry and Egg Association for research funding in this area,” said Peterson. “What we do know is there are trade-offs and that it is important to take into consideration chicken welfare, sustainability, and providing safe, affordable food for consumers.  There may not be any measurable welfare benefits to the birds, despite these negative consequences.  Research will help us identify if there are additional, unforeseen consequences of raising birds for longer.” 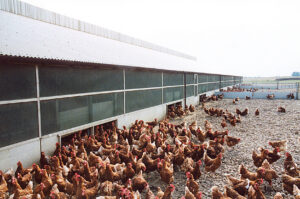