Phillips’ technical team visited sites on numerous occasions and met and discussed a solution to eradicate extra labour during set up, which was mainly due to manually discharging top-up bales to create the required elevated platform for the eggs.

After several meetings and trials on farms the innovative process was developed, with the added value of saving additional costs and speeding up the entire set-up process. In addition, the method involves no plastic waste.

Once the operator completes depositing the initial shavings in the poultry house for the chicks, they then assemble an adaptation to the spreading equipment to create a raised central spread down the relevant parts of the shed to assist the egg laying machine to be able to create the elevated nest for the final incubation period of the eggs before they hatch. 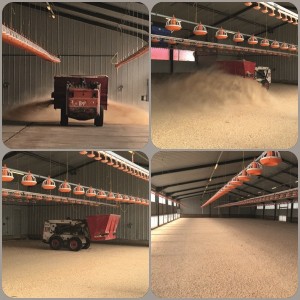 The success of this spreading technique includes economic benefits of reducing top-up usage and labour, saving three hours of setting up of the raised bedding. Tom Ford, of Whin Close Farm, who has eight broiler sheds, says he was impressed with Egg Spread, which he said was a “high quality and consistent product”.

“It spreads very evenly, saving at least 30 minutes of intense labour per shed,” says Ford. “Using this method as opposed to bales, we save around £300, and there is zero plastic waste involved.”

Edward Proctor, of Stows Farm, agrees it was a “very consistent product”, providing an even spread over the entire shed. “Egg bed spreading has saved us a least one man per day during set up with no detrimental effect on the hatch rate. The spreader drivers are always very helpful,” he adds. 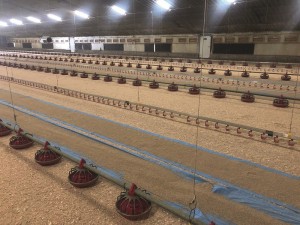 Darren Farrow, of Mileham Farm, says the time saved was a big benefit: “The Egg Spread saves around four hours work for us and reduces a lot of lifting. We have also found that the eggs go down better and we seem to get a more even hatch when the spread is done by Phillips instead of us doing it as it is level and not lumpy.”

The spreading in the sheds itself complies with rigid biosecurity procedures, as the product is transferred directly from the delivery trailer inside the poultry house, avoiding the product touching any parts of the shed apron.