How one producer turned to Lubing UK to help keep birds cool
Cheshire-based farmer James Charlesworth, of Red Hall Farm, has been a broiler grower for over 20 years. Hoping for a better return on his efforts than he had seen in recent years with his dairy herd, his first chicks were brought on to the farm in February 1998. 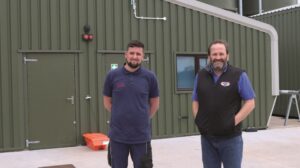 Not many years into his latest venture however, a heatwave hit the UK and in August 2003, Charlesworth suffered heavy mortality due to heat stress. Vowing to never find himself in the same position again, Charlesworth installed the Lubing Top-Climate misting system, which would enable him to cool the birds on those hot days. He has not looked back since.
In November 2019, Charlesworth placed flocks at his newest site, Tower Site, a twohouse site. A bit larger than the other eight houses he farms, the 320ft x 80ft buildings can each hold 51,000 broilers. A Lubing Top-Climate misting system was installed in each house before his March 2020 flocks, ready for any potential hot weather. As his houses were wider than any of his previous builds, Charlesworth took on board the recommendations given to him by Lubing UK and installed three lines of internal misting in each house. The central line has alternating nozzles and is suspended on a winch for easy height management.
The Lubing Top-Climate system utilises 1,000 psi of pressure through 0.2mm aperture nozzles. This results in an average droplet size of just 5 microns, differentiating Lubing Top-Climate from most misting systems that produce larger, heavier droplets.

The new system also runs off a sensor, which can detect the early morning rising temperatures from the very start of the day and which helps farm manager Arran Woods get ahead of any heat stress. Relative humidity can be a frightening subject for some growers, but Charlesworth says the birds can cope a lot better with humidity than they are often given credit for. “I have never, in all my years using the Lubing Top-Climate system, drowned a bird.”
He does point out though, that if the misting is turned on when the temperature starts to rise, the humidity never needs to be out of control. Thinking back to last year when he encountered his first hot days with the new site, Charlesworth estimates the temperature in the house was at least 10°C lower than what it would have been without the misting. He recalls that the temperature outside could be over 30°C and inside the house the birds would be none the wiser. “They continue to eat and drink as normal,” he says, which is another important factor, often overlooked in the race to cool heat-stressed birds.
Charlesworth points out that, in the grand scheme of his new build, the cost was minimal, and estimates that the system paid for itself in a single day, when he was certain he would have lost a good proportion of his flock without it. Woods also uses the system for humidifying the sheds before the chicks come in, keeping the humidity between 60% and 70% relative humidity for the first week, which helps to give the chicks the best possible start. 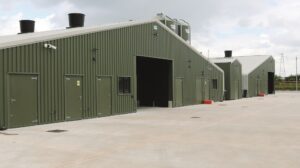 This is especially useful with new indirect heating systems, which are often much drier than gas-heated sheds, and which have seen some farmers turning the gas heaters on for the first week, in a bid to get the humidity up. Charlesworth and Woods agree it is exceptionally important to use the system at least once a day.
This keeps the water moving, and most importantly, gets the birds used to it. The last thing you need on a hot day is to frighten them with an unfamiliar noise or environment.