How producers can increase the size of their eggs and boost the bottom line.

The UK egg market is seeing a surge in the demand for bigger eggs and a widening gap in prices paid to producers for very large and large eggs. This is an incentive to producers to increase egg size, but it also raises challenges. Feed and management strategies can be used to manipulate egg size in laying hens.

But there are a number of factors involved, says Cargill’s technical poultry adviser Daniel Palcu. “Management factors, such as controlling the rearing phase, pullet weight, light and temperature control in the laying phase, and disease protocols, must be tip top,” he says. “But nutrition plays a major part, especially lysine and energy levels in the feed.”

Some producers are looking at adjusting diets to achieve heavier eggs that fall in to the very large and large categories. “Reformulating diets and adjusting amino acid and energy levels will influence egg size,” says Palcu. “We have achieved this in the past when demand has been stronger for smaller eggs, and diets have been adjusted, typically by reducing lysine levels, to achieve this.”

A study by Bonekamp et al. (2010) in Poultry Science looked at the effect of different lysine (Lys) levels on egg production and egg mass for light (white Lohmann LSL Classic) and heavy (Lohmann Brown Classic) laying hens from 24 to 60 weeks of age. Twelve treatment groups consisted of 47 layers each, divided over the layer house. They were fed a diet with six dietary amino acid intake levels evenly spread from 550mg to 800mg of true fecal digestible (TFD) lysine per hen per day. 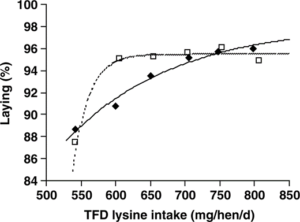 Other amino acids were included in fixed ratios and diets were restricted to maintain a feed intake of 110g per hen for heavy hens and 100g per hen for light hens to achieve the required balanced protein supply. The results are shown in Figures 1 and 2.

The results of this trial show that a daily intake of 600mg TFD Lys is sufficient to optimise the laying percentage of white light hens, whereas for brown heavy hens no optimum was reached with the current range of TFD Lys levels. This demonstrates the different levels between breeds, but of significance to UK producers, it shows that the TFD Lys level for optimal laying percentage is higher than the current tested 800 mg/hen/ day TFD Lys intake. Results for laying % within the lower TFD Lys treatments suggest that levels of 600mg TFD Lys for white light layers is risky. 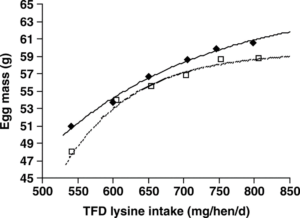 Egg mass improved up to the highest tested TFD Lys level of 800mg for both breeds (Figure 2), suggesting that these higher rates of inclusion will help producers maximise egg weight. The slope of the curves in both Figure 1 and 2 indicate that the required TFD Lys level for maximum performance is lower for white than for brown hens. “This illustrates that the breed has an effect on egg size, but also, that in each case, lysine levels will influence egg size and weight,” adds Palcu.

Fine-tuning energy There is a correlation between energy levels and egg size. “But it doesn’t mean that more is better,” he says. “Energy is the most expensive ingredient in the diet – therefore more accurate rationing will justify its use.” “Lysine and energy levels have a bearing on egg size, and producers can use these. We should also consider other nutritional factors when we are looking to increase egg size including the feed particle size, as this can influence feed consumption and therefore affect the egg weight.

Feed form is important too – pellet and crumble tend to increase egg weight – along with other amino acids, particularly the methionine levels, linoleic acid and total added oil. “From research, we know that by following specific nutritional recommendations for increasing egg weight, such as those for lysine and energy, we can increase egg weight by at least 1g/egg,” he adds.

US egg production down 1% in March