Free-range egg farmers might shift to barns even after housing order ends, as fear of AI continues

Free range egg producers in England have said they might choose to keep their hens indoors even after the Defra-imposed housing order ends on 28 February.

Speaking at the National Farmers’ Union (NFU) conference this week, several farmers told a panel including chief vet Nigel Gibbens, NFU Poultry Board chairman Duncan Priestner, and Charles Bourns of Copa-Cogeca, that the risk of ranging would be too great and they would be prepared to sacrifice their free range status and continue to house their birds at the beginning of next month.

“I’m surrounded by other farms,” said Norfolk poultry farmer and UKIP MEP Stuart Agnew, during the poultry break-out session held on Wednesday morning at the NFU conference, held at the ICC in Birmingham. “After 28 February, we will not be in one of the higher risk zones, so initially my family and I celebrated. But my vet sent me a questionnaire and the first question was ‘Do you see gulls on the range?’ And I do. I couldn’t tell a porky on the very first question. So I think I have come to the conclusion that we will continue to house the birds.”

Alan Warrington, chairman of Staffordshire NFU said he had reached a similar decision. “I am inclined to keep them in,” he said. Despite being nowhere near the coast, flocks of gulls were frequently seen and there were other nearby large bodies of water than attracted wild birds, said Warrington. 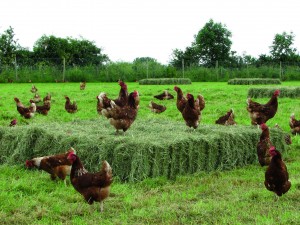 Gibbens said he was pleased farmers were deciding to take a low risk approach, despite the potential financial implications of losing free range status. After 28 February, farmers in most areas of England will be able to let their birds out, on the proviso they increase biosecurity measures. “We want you to take sensible, practical measures, check and clean outdoors and use bird scarers,” said Gibbens. In certain areas deemed ‘higher risk’ a compulsory housing order will continue.

“We are choosing to increase the risk,” said Gibbens. “What you do depends on your risk appetite.”

How to prepare free range layers for ‘hen lockdown’