The threat from animal activists

Poultry farms are facing a growing threat of incursions by animal rights activists, with a heavy impact on reputation and mental health. So what can farmers do to reduce the risk of being targeted?

It was the moment every poultry farm dreads. In late January, around 150 animal activists descended on Hoads Farm in East Sussex, occupying the site and “liberating” 50 chickens from captivity. A video was circulated alleging sick birds and rotting bodies, and the reaction was instantaneous and inevitable: a cascade of negative media headlines, an RSPCA investigation and probes by supermarket customers. In short, a farmer’s nightmare.

Hoads Farm was quick to open itself up to media scrutiny in the aftermath, insisting the videos had been taken during turnaround and that animal welfare was its highest priority. Its RSPCA membership was ultimately reinstated, but the stress and reputational damage, in the short term at least, was undeniable.

The group behind the Hoads Farm incursion, Direct Action Everywhere (DxE) Brighton, last month re-branded itself as Anti-Speciesist Resistance and vowed to intensify its activity against animal agriculture and build a ‘vegan movement’ that boycotts the industry. Describing itself as “a radical anarcho-vegan collective using an ethos of direct action to mobilise against speciesism and all forms of oppression”, the group’s manifesto urges supporters to “fight the system, shut it down, burn it to the f**king ground”. It’s clear that organisations such as themselves, Animal Rebellion, Animal Think Tank and even Extinction Rebellion will only become more vociferous in their attempts to highlight perceived animal injustices within farming.

It comes at a time when farmers are having to contend with rising crime levels across the board, with rural crime costing £49.9 million in 2018 [NFU Mutual], a 12.1 per cent rise on the previous year and its highest level since 2011. That only tells part of the story though, as the cost to business reputation and farm morale of an incursion by activists is incalculable.

The worrying thing for poultry farmers is that the Hoads Farm case was not an isolated one, and while activity is inevitably ramped up during Veganuary, such incidents are on the rise. According to Rebecca Davidson, rural affairs specialist at NFU Mutual, farmers are increasingly coming under intense attack from activists who are using a fast-changing range of tactics to target farm businesses. That’s having an inevitable knock-on effect on farmers’ mental health, which was already under strain from a cocktail of pressures from avian flu to low margins and even the loneliness of the job. 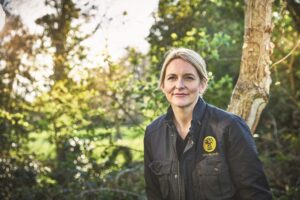 “One of the most alarming findings from the NFU Mutual Rural Crime report is that fear of crime is changing life in the countryside,” says Davidson. “Many farm businesses are family-run and rural crime, including the rising threat of activism, can add to feelings of anxiety. We have seen a rise in farmers and rural dwellers fearing their every move being monitored by the perpetrators. Some farmers are so concerned about the risk of criminal attack they can no longer leave the farm with their family to attend local events.”

Given the biosecurity risks of having unauthorised persons on site, farm incursions by activists come under the remit of anti-terror police, and the subject is even more sensitive at a time when the industry is on heightened alert over avian flu.

It doesn’t help that so-called ‘militant’ activists do not always receive much censure from official bodies. Asked for their thoughts on the activities of groups such as Anti-Speciesist Resistance, a spokesperson for the RSPCA simply stated: “Any allegations of poor welfare on RSPCA Assured certified farms are taken extremely seriously, irrespective of who has made the complaint. They are always thoroughly investigated and appropriate action is taken if necessary.”.

Highlighting the extent of tension between animal welfare groups and producers, the spokesperson – who stressed that poultry farms must ensure they maintain RSPCA standards at all times – added the RSPCA believes the industry has a long way to go and that “a significant number of laying hens and the vast majority of chickens farmed for meat are kept in conditions which we don’t believe are acceptable”.

The Vegan Society, at least, distanced itself from intrusive activism when approached by Poultry Business, insisting it promoted a peaceful approach. “As a registered educational charity, The Vegan Society is not involved in and nor does it condone any illegal activity,” says spokesperson Matt Turner. “We are keen to understand what motivates people to go and stay vegan and will always encourage activists to share their message peacefully and positively. Many vegans passionately share the message about the benefits of our lifestyle and while there are many forms of vegan advocacy, some of them may not be as effective as others. A better form of advocacy is one that encourages a meaningful dialogue and is in a neutral location, where people’s minds are more open to hearing about veganism.”

There are a variety of steps that farmers can proactively take to protect themselves. It might be stating the obvious, but farmers should naturally do everything possible to ensure there is nothing to ‘reveal’, making sure animal welfare is high and relevant assurance standards are being met. Beyond that, there have been big steps forward in precision technology to help with productivity and security, as well as the development of systems such as 24/7 poultry monitoring service Optifarm. Protecting electronic equipment with non-standard passwords or PINs can also stop hackers who may be planning to share footage, disrupt businesses or organise protests, while CCTV can help prevent incursions.

Social media is also becoming a crucial tool in acting as “the eyes and ears of the countryside”, according to Davidson, with schemes such as Farm Watch linking the farming community with local police forces to help identify suspects and forewarn against planned protests.

Where farms do fall victim to incursions, Davidson says it is important to remain calm and polite, ensuring human safety is paramount given the potential risks of injury on a farm. The police should be called, and important information gathered that could be used as evidence. To avoid such a crisis in the first place, it is essential that staff are well trained and understand the high standards and practices that are expected, while support networks with neighbours and online watch schemes can help warn of potential issues. Effective insurance and risk management plans should also be in place.

What seems inevitable is that the uncomfortable standoff between animal rights activists and the meat production industry is only likely to intensify, meaning farmers must do all they can to protect themselves. Maximising animal welfare, good practices and a spirit of positivity can go a long way in minimising the risk of being the next farm thrown into an uncomfortable spotlight.

Poultry farms are being urged to step up their security and avoid becoming a victim of crime during the coronavirus crisis. Jonathan Ratcliffe from CCTV.co.uk says he is receiving more reports of pilfering and so-called “quiet crime” while police’s attention is focused elsewhere, warning that as a food source poultry and eggs are under particular threat at a time when food is perceived to be in short supply. He cites the example of a smallholder micro egg business in Yorkshire that had 12 hens stolen overnight by a man in a van last month, pointing out that smaller animals and poultry are an easy target for small-scale thefts. NFU Mutual’s Rebecca Davidson adds that criminals take advantage of disruptive events to target farms at times of crisis, and the trend is already visible during the coronavirus pandemic. “In the last few weeks, we have received reports of stolen poultry and livestock,” she says. “These thefts, together with continued attempts to steal machinery and people walking irresponsibly in the countryside, are making it hard for farmers to concentrate their efforts on producing food to feed the nation.”

Share. Facebook Twitter LinkedIn Email
Previous ArticleWhat your poultry vet can do for you during the current coronavirus outbreak
Next Article Growing chicken, the Better Chicken Commitment way

January 27, 2022
We use cookies on our website to give you the most relevant experience by remembering your preferences and repeat visits. By clicking “ACCEPT ALL”, you consent to the use of ALL the cookies. However, you may visit "Cookie Settings" to provide a controlled consent.
Cookie SettingsREJECT ALLAccept All
Manage consent