A Norfolk poultry farmer has spoken out about his battle with depression following a diagnosis of incurable cancer, to encourage other farmers to seek help if they are struggling with their mental health.

Patrick Joice, whose family farm in Norfolk grows chicken for Banham Poultry, was diagnosed with a rare cancer last year. During a trip to Australia at Christmas to visit his wife Zanna’s family, his mental health swiftly declined and he finally sought help from a GP after becoming overwhelmed with dark thoughts.

“I never used to believe in depression,” says Patrick. “I thought it was an excuse for people who were bone idle and needed a kick up the arse. Now I realise the brain is pretty much like any other part of the body and it can become broken.”

It was only in February, after returning from Australia and starting counselling and antidepressants, and with the support of Zanna, he accepted he had depression.

Patrick, 45 and Zanna have a son and daughter, aged nine and six. The farm in Norfolk is run by Patrick and his father Nigel.

Patrick says he used to work every day of the year, and even on holiday would check in on the farm compulsively. “He was like a steam train,” says Zanna. “Always looking for the next project.”

“I feel like such a failure,” he says. “I wanted to protect and love Zanna our whole lives and that’s been robbed from me. It shouldn’t be like this. My father is 73, he should be retiring. I should be running the business; the kids should be lined up to have the opportunity to take it on if they so wish. I know the farm will be in extraordinary hands under Zanna’s guidance. But it’s not bloody fair.”

Patrick is brutally honest about the effects of depression. He often struggles to sleep because he is plagued by worries. He says Zanna has taken the keys to the gun cabinet and locked away all medicines, at his request. And he says his moods sometimes become so low it’s hard to know how to deal with them. He went missing for several hours recently, and was found in the woods, curled up on the ground, unable to get through the day with any sense of normalcy.

But conversely, he says his terminal diagnosis has given him a new sense of purpose. Specifically, he wants to encourage other farmers to seek help if they are struggling. He credits YANA, a mental health charity, that provides counselling and other support, with helping him to make sense of his experiences.

Zanna adds: “We talk a lot and we walk the farm tracks, day and night.”

The initial inspiration came after coming across the Australian Facebook Group ‘The Naked Farmer’ (below) which encourages farmers to talk about mental health, the reasoning being ‘It takes guts to take your gear off, as it takes guts to talk about mental health’. He says the response was almost immediate, with supportive messages coming in from all over the world, the greatest highlight so far is one of the farm suppliers, TW Page committing to new van signage highlighting YANA. 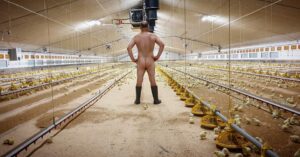 “Depression is rife. People put a mask on,” he says. “In our industry, there is so much pressure to get these birds quicker through the system, with little if any opportunity for our team to rest.”

He’s also keen to encourage farmers to talk more about succession planning. Too many farmers rely on succession via death, which prevents smooth knowledge transfer and continuity. His experience has convinced him farmers should be more open about planning for contingencies and adopting better policies on succession.

For the time being though he’s spending as much time as possible with his family. “The doctors reckon I’ve got about two years. These diseases, although awful, have come with some positives. We have been able to refocus on the important things in life and enjoy our time together. Every day is a blessing”.

The YANA (You Are Not Alone) Project

It was set up 10 years ago to provide confidential support, mental health awareness and funding for counselling.  The counselling provision can be put in place within a few days and is a key part of its work given that waiting times for NHS counselling can be several months.

Farmers have traditionally been reluctant to communicate about mental health, usually presenting as stoical with a “just carry on” attitude, says Melinda Raker from YANA. “Fortunately, that attitude is changing and Patrick’s openness is an excellent example to others who may be struggling. Seeing your own doctor promptly and being completely honest about how you are feeling is the best action, but there are support groups specifically for farming and rural communities across the UK.”

All contact with the YANA helpline and counsellors is completely confidential. “There will, we promise him, be positives to this,” says Melinda. “We have already seen an increase in calls to the helpline, more contact via twitter and others raising funds to support us thanks to him baring all.”