The leading supermarkets had their best year-on-year sales figures this year, even after excluding the positive impact of the late Easter, according to Nielsen retail data.

Overall, year-on-year takings at supermarket tills during the four weeks ending 22 April rose +8.6%, while the volume of goods sold rose +3.2%¹. However, because the timing of Easter distorted the annual comparison, Nielsen looked at annual growth across the last 8-week period (so last year’s Easter was included) which revealed sales rose +2.8%, the highest growth this year.

Mike Watkins, Nielsen’s UK head of retailer and business insight said, “This shows the underlying health of the supermarket industry is pretty good, even if we exclude the positive distortion caused by the late Easter. For example, when purely comparing Easter weeks this year and last year, sales were up 3.5%.”

Watkins thinks this grocery data should counterbalance the recent ‘rather downbeat’ stories about consumer spend in general. He said, “Whilst consumers are more likely to be uncertain around spend, we don’t expect a dramatic change in grocery shopping behaviour this year. As long as real incomes don’t come under too much pressure and employment remains high, shoppers will begin to adapt to moderately rising grocery prices, albeit this could be by modifying how much they spend in other retail channels.”

Impulse goods, such as crisps and confectionery, saw the biggest year-on-year sales rise over the last eight weeks (up 7.5%) followed by drinks (+6.5%) and fresh foods (+3.4%). Watkins noted the rise in ‘more indulgent’ foods, as shoppers’ trade up for special occasions, mirrors the strong performance of higher-end retailers M&S and Waitrose and shows shoppers remain confident when it comes to grocery spend. 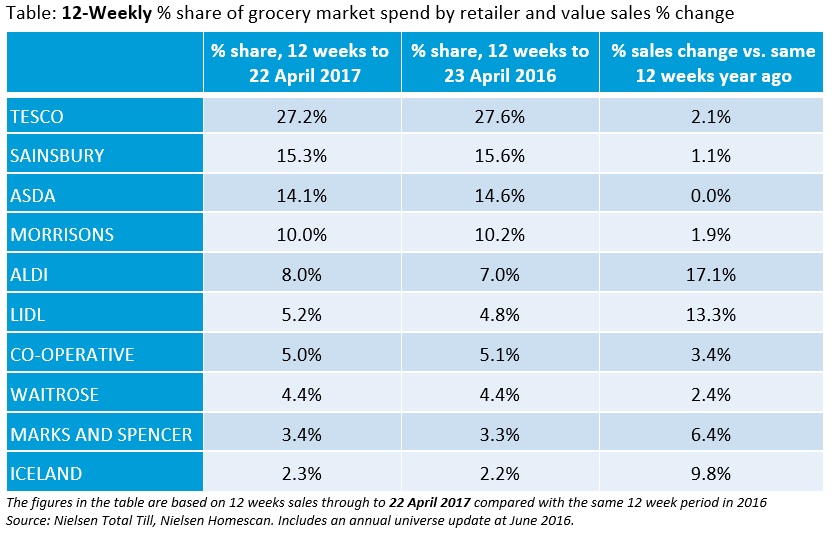 “As inflation gains momentum over the next few months, we expect shopper promiscuity to continue, leading to more visits to different stores as shoppers find ways to manage the overall cost of their grocery bill,” he concludes. “So customer retention is likely to be the next battleground for retailers, however, this shouldn’t mean a race to the bottom because consumers aren’t solely motivated by the lowest price but also by getting the best value. Be this shopping in more convenient locations or being able to buy product ranges that give the option to “dine in at home” rather than eat out, if it helps save money on the monthly household budget.”
Share. Facebook Twitter LinkedIn Email
Previous ArticlePremium ranges booming in latest supermarket sales data
Next Article New fried chicken brand aims for guilt-free fast food

The potential of beans in poultry diets

August 15, 2022
We use cookies on our website to give you the most relevant experience by remembering your preferences and repeat visits. By clicking “ACCEPT ALL”, you consent to the use of ALL the cookies. However, you may visit "Cookie Settings" to provide a controlled consent.
Cookie SettingsREJECT ALLAccept All
Manage consent