Even though the bad weather meant the number of visits to grocery stores fell during the four weeks ending 24 March, the amount of items shoppers bought rose by +0.4%¹ year-on-year – the second highest rise since 2016 (excluding seasonality-affected periods).

As a result, and combined with inflation, shoppers spent 3.3% more on groceries compared to the same period last year (or 2.6% more, excluding the discounters¹).

“The winter weather in late February and early March certainly disrupted shopping patterns but not enough to knock food retail out of its stride because its underlying health remains strong,” said Mike Watkins, Nielsen’s UK head of retailer insight. “This is built on the big four supermarkets having adapted well to changing market conditions and consumer behaviour, and the sector has effectively seen 13 straight months of growth above 2%. This is in stark contrast to non-food retail who are still adapting to their changing marketplace.”

Watkins points out that even though grocery sales in the week of the storms fell 1%, “they rallied by a massive 12% the week after (week ending 10 March) – helped by Mother’s Day – as shoppers returned to the high street.”

Three categories in particular benefited as shoppers stocked up in advance of the storms; beers, wines and spirits saw a 7% year-on-year rise in sales during the four week period, frozen foods rose +5%, and packaged groceries +4%. In contrast, fresh produce sales fell -2%.

How the individual supermarkets performed

Over the twelve weeks ending 24 March, Tesco had the most improved year-on-year performance among the top four supermarkets, with sales up 3.1% – its fifth consecutive period of 3%+ growth. This was followed by Asda (2.9%) “whose recovery in sales continues to gain momentum,” said Watkins.

Overall, Iceland (up 3.9%) had the best growth figures outside of the discounters. In contrast, even though they’ve gained shoppers, M&S sales (up 1.3%) have started to slow due to fewer store openings than a year ago. 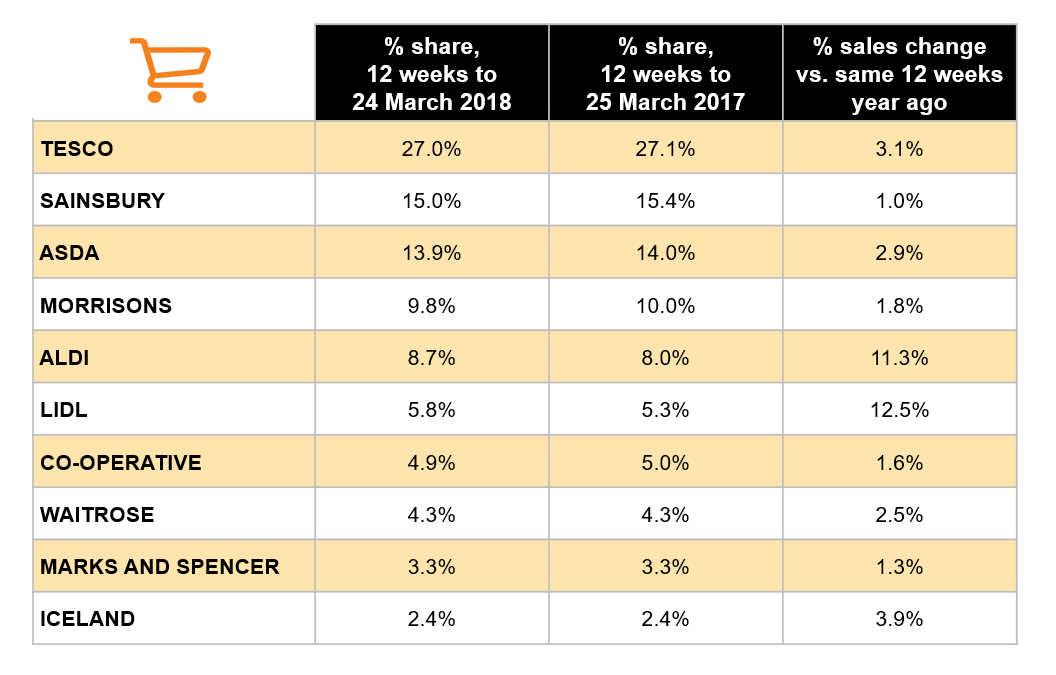 The figures in the table are based on 12 weeks sales through to 24 March 2018 compared with the same 12 week period in 2017. Source: Nielsen Total Till, Nielsen Homescan.
“The recent Nielsen Consumer Confidence survey showed that 48% of shoppers are looking to save money, so some may be cutting out ‘unnecessary’ trips as part of carefully managing household finances,” said Watkins. “Furthermore, with a cold, wet and early Easter unlikely to have helped underlying sales as much as hoped in the last few days, all retailers will now be keeping an eye on the start of a late spring and the May Bank Holiday to kick-start spend. However, the good news is that supermarket food inflation is now slowing which might help shoppers spend more on impulse categories.”
Share. Facebook Twitter LinkedIn Email
Previous ArticleMajor export deal for Aviagen announced during Government visit to Thailand
Next Article Thomas Wornham elected as new national poultry board chairman

May 19, 2022
We use cookies on our website to give you the most relevant experience by remembering your preferences and repeat visits. By clicking “ACCEPT ALL”, you consent to the use of ALL the cookies. However, you may visit "Cookie Settings" to provide a controlled consent.
Cookie SettingsREJECT ALLAccept All
Manage consent