Feature: Why poultry is finally getting more attention at veterinary colleges

Poultry medicine has always struggled to get its fair share of time and attention at veterinary colleges. Now things are starting to change.

Traditionally veterinary colleges have little time in the crammed syllabus for commercial poultry – probably on the basis that the vet in a typical mixed practice has little contact with poultry beyond the occasional backyard hen.

But the situation is changing with several of colleges now embracing more poultry teaching and encouraging undergraduates to consider a future in the industry.

Surrey University, which began taking veterinary undergraduates in 2015, prides itself on the amount of intensive production tuition in the syllabus.  Henrietta Kodilinye-Sims, a poultry vet who is production species lead, recalls how little she learned about the topic during her training at the Royal Veterinary College.

“Devoting just two hours to intensive production and barely bothering with backyard medicine is ridiculous,” she says. Chicken accounts for half of all meat eaten in the UK, and chickens are the fourth most popular pet. “Vets are terrified of seeing chickens purely because they’ve had a complete lack of education.”

She went straight into a mixed practice for three years.  “This was 99% companion animals and I was bored to tears,” she says.  “I saw an advert for a poultry internship in the Veterinary Record one day and I thought ‘let’s have a go’, and it was the best move I ever made.  It was wonderful, really good.”

When Kodilinye-Sims moved to Surrey University she was determined to give intensive production a greater place in the syllabus. Students go on to farms and have lectures in the second and third years, then in the fourth year there is an entire module on intensive production – a whole quarter of their clinical module is spent on pigs and poultry.

The first of the newer vet schools at Nottingham University opened in 2006, and there Michael Clark, former poultry director at Minster Veterinary Practice, is now a clinical associate professor in poultry medicine as well as a veterinary adviser in the pharmaceutical industry.

“We’ve always prided ourselves in having commercial poultry in the syllabus,” he says.  “Each year we have 150 undergraduates; 100 to 120 will go into small animal practice, and the majority of the others will go into farm or equine practice. If two or three end up in poultry practice, that’s a good year for us.

“Most of us started as mixed practitioners and fell into poultry medicine, whereas now there are five to ten new graduates throughout the whole country that are going straight into poultry medicine. That’s for a variety of reasons. Firstly, there are good career opportunities, secondly the industry and poultry practices are better at reaching out to undergraduates, and vet schools are getting better at knowing how to handle undergraduates with industry interest and pointing them in the right direction.”

John Kenyon, Zoetis national veterinary manager, started his career with a degree in economics and management before opting to study at the Royal Veterinary College and work with St David’s Poultry Team for four years. 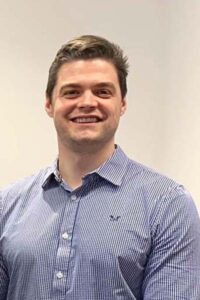 “I’ve absolutely no regrets about going straight into the poultry industry on graduation,” he says.  I’ve found it a really interesting career in a very fast-moving industry. You use a lot of the veterinary skills that you’ve learned at university, but in a slightly different way to how you would in other veterinary disciplines.

“I’m always surprised why more people aren’t interested. It’s a really interesting industry with good job prospects. There’s lots going on and good prospects to diversify away from clinical practice if you chose to do so.”

Richard Jackson, clinical director of St David’s Poultry Team and junior vice president of the British Veterinary Poultry Association, says internships offered by poultry practices offers a way into the sector from university.  “When you get your degree you get day one skills in all the common species and the aim of the internship is to give the young vets day one skills as a poultry vet. This will take between six and 12 months.”

He says there is a shortage of young poultry vets, and he and his colleagues go to careers fairs and give presentations to students at their clinical clubs to raise awareness of the opportunities.

Another way that graduates can further their knowledge of poultry is through distance learning to obtain a Masters degree in Applied Poultry Science with Scotland’s Rural College.

“Typically we have between five and 12 students each year, and we might have one or two vets in each cohort,” says Dr Vicky Sandilands, SRUC poultry behaviour and welfare scientist. “We’ve one poultry vet who’s just finishing off his dissertation, and we have another two – based in other parts of Europe or Africa – doing their degrees with us as well.

“The course is very flexible – it’s the quickest you can do it is in three years, but it can be done in up to six years. Alternatively, you can just take one specific course in the suite if that’s all you require.”

Growing up in a Suffolk family involved in farming, Beth West initially graduated with a degree in bioveterinary science at Royal Veterinary College and then decided to move into the clinical side by studying veterinary medicine at the University of Bristol. 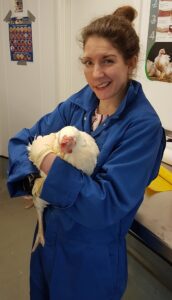 “I hadn’t lived on that side of the country where there’s more livestock farming and it was in such a good location for me. I could even go out from the campus running on to the Mendip Hills,” she says.

“In my final year I was still thinking I would go into farm work experience around Bristol. I listened to a few poultry lectures – one from John Kenyon – and then it was another week of work experience at Crowshall that really won it for me.”

As the only one from her year of 120 students going into poultry, she joined Slate Hall in 2018 straight after graduation on an internship programme and learned about the basics from other vets and spending time on broiler and breeder farms.

“Nobody can prepare you for that first time you walk into a broiler shed,” says West. “With upwards of 40,000 birds in there, it’s the sheer scale that comes as such a surprise. You just can’t imagine it, especially coming from university where you’re taught on an animal-by-animal basis and know nothing about big broiler sheds and aspects like ventilation.

“I really wanted to get into something niche where you get really good at smaller things.  When you’re a general practitioner, you have to deal with so many different species and never really specialise in any one.

“One highlight is getting to know the clients and forming that bond. I remember reporting on my first few post-mortems, feeling a bit nervous, thinking about how much detail should I go into. You build some really good friendships with your clients, dealing with the same people day in, day out, and it’s really enjoyable.”

She adds: “I wouldn’t change it now. I’ve got my own dog and obviously I take him to small animal vets – but I couldn’t do what they do, not day in and day out.”

The National Egg & Poultry Awards 2020 has introduced a new category this year – Young Poultry Farm Vet of the Year sponsored by Zoetis.

“The award will help in recognising the good work that people do and how really fast people tend to progress in their careers as poultry vets,” says Henrietta Kodilinye-Sims. “Being able to showcase people who’ve done that will really show that poultry is a proper career for life with global opportunities as well.”

James Porritt, Zoetis national sales manager, says: “We are very proud to be supporting the new Young Poultry Farm Vet category.  We initially proposed an award specifically for young pig vets and we are now delighted to be supporting a similar award for poultry vets.

“The award will highlight the many opportunities for young vets in the poultry sector – including associated businesses such as our own – and we are keen to help them succeed in working with their clients. It is really important that all industry stakeholders keep supporting young entrants whether they be farmers or vets.”