“The unpredictable weather finally started to disrupt grocery spend, particularly compared to last year which saw a mini heatwave in mid-April which meant a significant short-term boost to sales,” said Mike Watkins, Nielsen’s UK head of retailer insight. “A significant change in the weather can give supermarket sales as big a boost as an important event such as Easter, which is what happened in the week ending 21 April this year. The three days of hot weather helped sales jump 11% year-on-year. However, this wasn’t enough to offset the previous three weeks of poor weather.”

In addition to the overall slowdown in the amount shoppers spent, the number of items purchased year-on-year fell 1.1% – the poorest growth figure for over seven months – which Watkins said shows “shoppers are still cautious about spending despite food price inflation slowing down.”

How the individual supermarkets performed

Across the twelve weeks ending 21 April, Asda’s sales momentum continued, having the most improved year-on-year performance of the top four supermarkets, with sales up 2.3%. Its share of the grocery market stands at 13.9% and would mean a combined market share with Sainsbury’s of 28.8% if the proposed merger went ahead – above Tesco’s 27.1%.

Watkins said: “Both retailers have over half of all households as shoppers every 12 weeks, while over three-quarters also visit Tesco. This illustrates how competitive the retail landscape is, which is why we’re seeing further consolidation within the industry.” 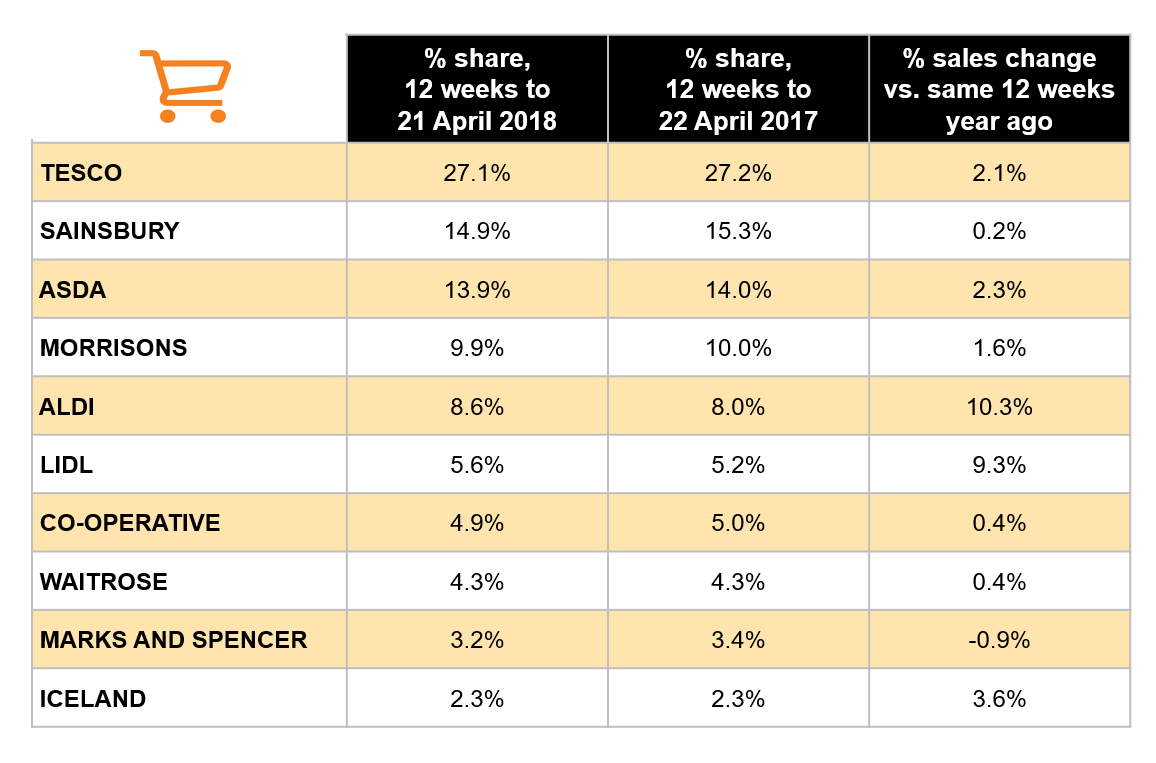 The figures in the table are based on 12 weeks sales through to 21 April 2018 compared with the same 12-week period in 2017. Source: Nielsen Total Till, Nielsen Homescan.
Looking ahead, Watkins said that sales momentum will be “kick-started by any sustained period of warm weather and the proximity of the two bank holidays in May plus the Royal Wedding. This is all good timing, with the activation of promotions around the football World Cup kicking off soon after. These three events should be enough to return the industry to volume growth during the next eight weeks.”
Share. Facebook Twitter LinkedIn Email
Previous ArticleNew research on food processing contamination published
Next Article Best workplace gong for AB Agri