Lallemand has worked with farmers to introduce products that help support gut health and deal with bacteria in poultry houses, reducing the need to treat conditions with antimicrobials

Poultry housing contains a complex microbial environment with potentially high pathogenic pressure. Undesirable residual bacteria present after disinfection can recolonise what otherwise appears to be a ‘clean’ building with biofilm, presenting a health risk to the newly placed chick.

One product designed to deal with this is Lalfilm PRO, a blend of bacteria selected for their ability to form a positive biofilm and inhibit pathogenic bacterial growth. By adhering to surfaces and installing a protective positive biofilm within the building, it can be complementary to the cleaning process in creating a safer environment for bird growth. 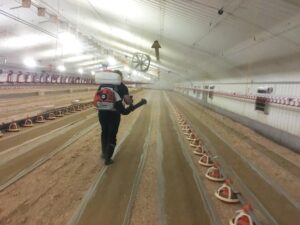 The product being applied to the inside of the building using a cold, low pressure fogger.

Alongside the risk of contamination from opportunistic environmental bacteria, birds also encounter periods of stress during their life which can negatively impact gut health and subsequent performance and well-being.

One product designed to help deal with pressure on the gut is Bactocell drink, which contains a probiotic bacterial strain which supports gut maturity and integrity through diet optimisation plus microflora balance, especially during periods of stress. Improvements in litter quality have been reported on farm.

Phillips started in poultry in 2014. He previously worked for Tarmac for nine years before becoming a poultry farmer.

Phillips initially did two broiler crops for Cargill on a company farm, while project managing the building of Shed Field. It became operational in July 2014. 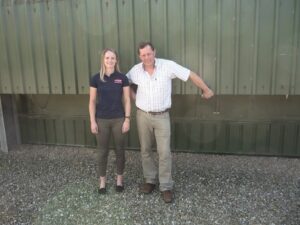 He now produces eight cycles a year of 200,000 birds, over four houses and supplies Avara Foods. He is also a member of Red Tractor and NSF and is part of the Integra scheme auditing for Tesco.

Phillips has been using Lallemand’s Lalfilm PRO and Bactocell drink for five crops, after initially trialling two sheds. Since starting the programme, they have stopped using any hatchery products.

No antibiotics have been used on the farm since 8 January. “You have control over when you can use it and you can change what you’re doing if you have to treat the birds,” says Phillips. “You also have better control over money, rather than paying for hatchery product and the having to treat the day after. It is good to be able to spot use and change up what you’re doing.”

Two crops ago, he achieved 426 EPEF, with 410 EPEF on the last crop, a big improvement for the site.

Initially, Phllips had to overhaul his water management to make sure everything was clean and running well, then he added the Bactocell into the lines to support water quality.

“I have seen a good drop in mortality and have had a big drop in rejects. The best has been within the last two crops – 1.5% decrease in rejects and mortality. Birds have also been more even since using the programme,” he adds.

“Feed conversion has definitely been betters since using the products, with a 1.46 FCR,” says Phillips. “Differences can be seen crop on crop, with accumulative results. They are easier to manage, and I spend less time picking up dead birds and culling. It’s easier for the catchers too, I’ve had comments about fewer dead birds around when thinning and clearing.”

Previously Harrison was a dairy farmer but converted the site to chickens four years ago; Gourlay used to work for a cereals company.

The pair has six sheds, with 350,000 birds, and are members of Red Tractor, recently achieving a perfect audit. 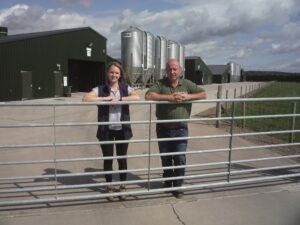 The farm started using Lalfilm PRO and Bactocell Drink four crops ago. Harrison and Gourlay initially put it in to help gut health, then noticed the litter quality improving. “Faecal quality is the most noticeable thing,” says Harrison. “It’s better formed and drier. The very wet spots that they always used to have, patches where you would sink, are now dry capped.

“It’s a much drier surface for the bird than the very wet, ‘fudge’ type litter, where shavings would never help with consistency,” he adds. “Shavings can now be applied and will stay dry rather than sinking and getting wet.”

They have had fieldsman comment on the better formation of faeces, Gourlay says. “He commented that you can always tell whether a farm is using the probiotic as to how well formed the faeces are as you walk around.”

All farms have problem areas, but you can see that the litter has been lifted and problem areas, such as hock and podo issues, have improved, she adds.

“There are also more even birds leaving the farm; it’s much more consistent since beginning the programme. They also seem to cope with the starvation stress much better,” says Harrison.

“It’s also something you can give as an alternative to treating sometimes, which you don’t then have to pay a ‘litter penalty’ for. Sometimes you have to treat to get the water and feed intake started with the younger birds and you know that wet litter will follow as a consequence. When we use the drink, we know that the litter won’t be sacrificed as the quality of the faeces is preserved,” he adds. “We have seen a better crop fill within the first 12 hours of chick tip, using the drink sprayed on the feed, than when they were untreated.”