Feature: How to realise the true potential of farm data

The poultry industry has made significant steps forward over the last few decades, with closer attention to detail allowing improved bird performance, health and welfare. However, with margins continually getting squeezed and consumer expectations increasing, its time to make further advances. But how can this be achieved?

Accurate data collection and the use of technology to achieve this, is going to be fundamental in further improving farm efficiencies to allow birds to meet their true potential, and to aid supply chain transparency and traceability.

Wireless sensor technology that can be set-up on farms to capture and monitor health and welfare parameters in real-time, could be the answer to identifying health issues sooner and further improving efficiencies and performance.

The importance of data collection for farmers

“As an industry we’re already collecting and monitoring data that allows us to benchmark performance. However, in many cases this relies on producers manually inputting data on a regular basis, which is where the industry is currently falling short.

“However, a remote monitoring system will soon be commercially available that will allow broiler producers to collect real-time data on multiple health and welfare parameters via wireless sensors. This data will then be collated in a bespoke analytics platform ready for interpretation by producers, vets and other key stakeholders in order to inform on-farm decisions.

“For producers, this will offer many benefits. It will eliminate the requirement to manually enter data which will help overcome issues with inaccuracy and inconsistency, it’s less labour intensive and it will also allow farmers to access reliable, real-time data,” she says.

“Having this information to hand will also mean producers can accurately compare data against other sheds and previous flocks, while also identifying trends and changes in bird health and welfare which may indicate a problem.

“This software will be particularly useful on sites with large numbers of staff, as it’s sometimes challenging to ascertain what has happened on site if all  required information hasn’t been recorded, or if staff members aren’t working on a particular day.”

Ackerley explains that the wireless sensors are capable of monitoring and providing data on key parameters such as house temperature, humidity and bird weight as well as water consumption.

“We’ve been carrying out trials with this technology on broiler farms, and specifically looking at how the implementation of sensors in poultry houses have helped identify variations that could affect bird performance.

“On one specific farm we installed forty wireless sensors in one poultry house across multiple internal ‘zones’ and the results where enlightening,” she adds. 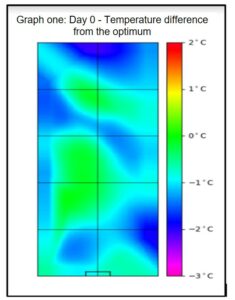 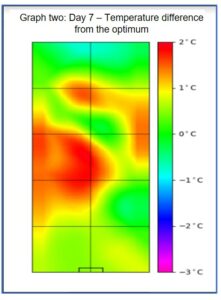 “Because the house temperatures were too cool when the chicks arrived, it was more challenging to achieve a profitable FCR (Feed Conversation Ratio) and EPEF (European Production Efficiency Factor). In this specific example, the birds finished approximately three days behind target weight.

“Without this real-time monitoring system in place, we wouldn’t have been able to pinpoint as accurately why these birds did not reach their full potential, and make adjustments to allow future crops to thrive,” she adds.

“Graph three and four showcase temperature variation throughout a crop with graph four highlighting how data from previous crops allowed the producer to implement changes that saw the bandwidth of temperature variance tighten. 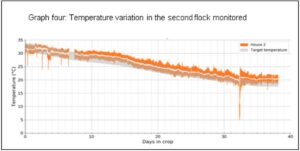 “In this instance the producer changed the set-up of the climate control system to ensure it was triggered sooner when conditions in the house varied from set targets. They’ve also taken to not adding shavings to houses until all of the floor area has reached the optimum temperature for chick placement.

“Making changes to ensure optimum temperatures are achieved throughout the whole poultry shed, at key milestones within a broiler birds life cycle, has led to performance improvements between the two crops of 13 FCR points and 65 EPEF points. This equated to an improvement of 24p/m2/week, which, had we not had this live data, these significant results may not have been seen,” she explains.

How can this system optimise supply chain transparency and traceability?

Supply chain traceability and transparency are factors that are becoming increasingly important, with consumer awareness of food safety standards and bird health and welfare on the rise.

“This wireless remote monitoring system has been designed so that it can securely communicate readings or data automatically, via the internet, without human intervention, allowing only authorised access to this information,” says Ackerley.

“This also allows any product origin disputes to be quickly overcome because trackable and traceable data is available from the very start of a broilers life, resulting in more transparent relationships throughout the supply chain.

“Access to accurate real-time data will allow the industry to take the next step forward in driving bird performance, health and welfare by playing a key role in supply chain integration, allowing more visibility for farmers, processors, retailers and consumers. This data-driven information will also help provide evidence and support to answer many of the questions that the industry often faces, as well as allow the poultry industry to continue to move forward and improve efficiencies.”