A sector in good health

A wide range of issues from production and trade to labour and welfare was discussed in the poultry session at the NFU Conference as the industry gets set for the post-Brexit era
By Michael Barker
Trade, labour and food standards were the hot topics of discussion for poultry producers at this year’s NFU Conference, in an event where it was clear the sector faces ample opportunities as well as no shortage of challenges.
In the first major meeting of the UK’s farmers following the UK’s departure from the EU, much of the spotlight was on what the country’s future trading relationship with Europe and the wider world will look like.
Patrick Hook, director of PD Hook, stressed that while there is great focus on “global Britain” in the post-Brexit era, it should be remembered that there are 68 million consumers in this country and a further 500m across the Channel in Europe. “That European trade we’ve had for over 40 years is almost being ignored,” he warned. “Discussions are being had with the Americans and others but really what is important is our domestic and European market. We have existing trade links that we must keep.” 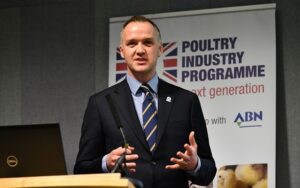 Central to the sector’s future are food standards and the UK’s competitiveness on the world stage. Several farmers in the poultry breakout session expressed concern over chlorine and peracetic acid-treated chicken being brought into the UK, though it was also flagged as a positive for the industry that chicken is being discussed in Parliament in relation to the high quality of home-grown product. “The debate is not really about chlorinated chicken,” said Hook. “This is really to do with standards and about capitalising on the debate around chlorinated chicken and then utilising the skill and expertise across our industry to make sure we lobby the government about the differential in standards between UK and US chicken.”
NFU Poultry Board chairman Tom Wornham pointed out that UK farmers are mainly growing for the fresh market and that imports are more likely to be directed at the frozen sector. “I think we are probably getting extremely excited about something that may well not be a big issue,” he stressed. “We want to build a brand, an image [for British product], so if chlorination has got the ear of the media, then all the better.”
Arguably of bigger concern is competitiveness, a theme that was raised several times across the two days of the NFU Conference. Veli Moluluo, managing director of the consumer foods division at Noble Foods, pointed to an independent study commissioned by the British Egg Industry Council that showed 16 per cent of the cost of producing an egg in the UK comes from animal welfare, environmental and food safety legislation. “That isn’t replicated anywhere else in the world,” he said. “So we are at a structural disadvantage when it comes to competitiveness. We are significantly more expensive when we negotiate trade deals, and we need some sort of protection.” 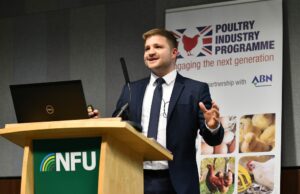 A further hot topic is labour, and poultry farmers’ mood has not been improved by the government’s recent immigration announcement. Hook highlighted the fact that 60% of workers in the chicken sector are from the EU, while Moluluo said the figure was over 65% in egg packing and processing plants. “It’s really important we get our industry on the shortage occupation list,” Hook stressed. “It’s not about cheap labour and it’s not about low skilled. You can’t just walk up a street and work on a chicken farm or factory. It’s skilled, permanent labour that is absolutely fundamental to the future success of our sector.”
To address these and other issues, Wornham reported that the NFU Poultry Board has been holding meetings with Jim Shannon, chair of the All-Party Group for Eggs, Pigs and Poultry, and a further breakfast scheduled for 18 March is seen as a chance for the industry to put its case to MPs.
While numerous challenges remain, the poultry industry will be buoyed by the news that sales are holding up well in the face of the meat-reduction and vegan trends. Kantar analyst Michael Moniz outlined figures showing that in the past year, retail sales of chicken are up 0.7% to £2 billion, while egg sales have risen 2.5% to £943m. Only turkey has suffered a dip, down 0.7% to £209m. “A lot of meat-free products are actually imitations of red meat products, so a vegan sausage or burger is something to counteract red meat rather than poultry,” Moniz explained. “When you think about someone dropping a red meat product from their basket it’s because of the health connotations or because it’s a bit too expensive. Those two elements aren’t as applicable to chicken and turkey as they are to the red meat proteins.” To underline the point, two years ago chicken featured in 15.8% of food occasions, a figure that has risen to 16.6% today. 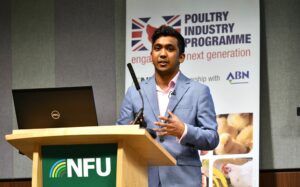 A big threat to chicken currently comes from an unlikely source – Moniz said in the past year there were £3.3m worth of poultry sales lost directly from people choosing to buy pizza instead. To grow the poultry market, Moniz suggested the industry should capitalise on the scratch and batch cooking trends by providing bigger birds and cuts, as well as highlighting to consumers the versatility of the meat.
Overall, to adopt the well-used mantra at recent farming events, it’s a time of challenge and opportunity. While government support and common sense is needed in terms of trade equality and labour, the poultry and egg sector is still in growth and its place on the plates of British shoppers does not appear in any imminent threat. Production practices will remain in the public eye and shelf prices are a concern, but overall the picture is one of a sector in good health and well set for the future.
Is there a future for white eggs?
One of the talking points at the NFU Conference surrounded white eggs, with farmer Phil Crawley asking what future they have at UK retail. Professing himself a fan, Noble Foods’ Veli Moluluo said there are many benefits of white egg production, and pointed out that in the Netherlands the brown-to-white ratio has reached 50-50. However, he pointed out that in UK trials, where brown eggs have been substituted for white at the same cost, sales have dropped by between 18 and 40%. “It’s unsustainable at that level and we have to say the consumer will decide,” he added. “The worst thing we can do as an industry is flood the market with white eggs that nobody wants and create an issue whereby there aren’t enough brown eggs to fulfil consumer demand and end up importing them. That would be a huge disaster.”
Several retailers in the room echoed the view that there are benefits to white egg production, including the fact that the birds are less aggressive, and suggested that in years to come we could see white eggs in the entry tier, backed by consumer education. That would be necessary as research showed that one of the main consumer concerns is whether the eggs have been bleached.
The welfare state
The topic of animal welfare was a popular one during the poultry session at the NFU conference.
On the subject of the Better Chicken Commitment, Tom Wornham reported that he, NFU chief poultry adviser Gary Ford and Poultry Industry Programme chair James Mottershead had visited the Netherlands courtesy of Hubbard to look at their Better Chicken production systems and “really liked what we saw”. However, he said that an Adas report showed it cost 16-20% more to produce a chicken than under Red Tractor standards. BPC chief executive Richard Griffiths added that while there is a growing list of companies ostensibly committed to the BCC, they are not using it in any depth and it is more of a PR exercise for them.
Meanwhile, Veli Moluluo raised the controversial issues of beak trimming and male chick culling in egg production, suggesting there was more for the industry to do on both. On beak trimming, he said the government believes the UK industry is slipping behind Europe and “we need to find solutions that will allow us to move forward with confidence.” On male chick culling, he said there are advancements in in-ovo sexing taking place, but at the moment it is cost prohibitive. “We continue to seek advancements and as an industry we need to be responsive to that and take advantage when it’s ready,” he concluded.