15 years after Jamie Oliver led a campaign for healthy school meals that led to Turkey Twizzlers being scrapped,  Bernard Matthews has decided to bring back the processed meat product.

The brand described the launch as the ‘comeback of the century’ and said it had developed a healthier recipe that is “just as tasty as the version many will love and remember.”

The original Twizzler machines have been recommissioned and the product will be available across all major retailers starting with Iceland from 20th August. Shoppers will be able to find them in the frozen aisle with an RRP of £3.00 for a pack of 8 Twizzlers.

Turkey Twizzlers will be available in two flavours, Original Tangy Tomato & Chilli Cheese, The company, which was bought by 2 Sisters founded Rajit Boparan in 2016, has erected a Turkey Twizzler statue outside the headquarters of Bernard Matthews in Norfolk. 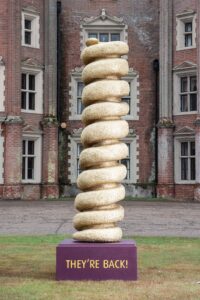