Poultry Business held a virtual round table discussion, sponsored by Boehringer Ingelheim. Marek’s disease and its prevalence and prevention was the topic, and PB editor Chloe Ryan was joined by a panel of experts to discuss the challenges and opportunities in different parts of the supply chain
The panel clockwise from top left
ALEXANDRA MCDANIEL Avian veterinary advisor at Boehringer Ingelheim
KEITH WARNER Head of poultry health and welfare and agricultural assurance at Avara Foods
RICHARD JACKSON Clinical director St David’s poultry team and president of the BVPA
MIKE CLARK Avian veterinary advisor at Boehringer Ingelheim, clinical associate professor in poultry medicine & agribusiness at Nottingham Vet School and junior vice president of the BVPA
JOHN HODGKINSON Production director for Lohmann GB, representing 20 farms within the company that produce layer parents and broiler breeders 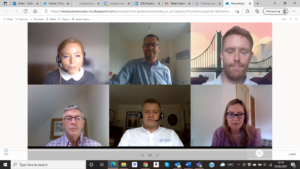 Marek’s Disease (MD) is a highly contagious endemic viral disease that is prevalent in the environment and affects poultry with symptoms including increased mortality, paralysis, and organ and skin tumours. For a long time, it has been controlled through vaccination, but over the years the virus has become more virulent.
Different parts of the poultry sector are affected to different degrees, with longer lived birds such as breeders and commercial layers more seriously impacted by an outbreak. Standard broilers do not generally live long enough to show overt clinical signs, although infected broiler flocks can show signs of immunosuppression and sometimes signs are discovered in broilers at the abattoir, when 5-10% of an affected flock can be rejected by the processor.
One of the complicating factors in controlling MD is that it is not always easy to secure a definitive diagnosis. But amid the uncertainties, there is agreement that the disease has evolved to become more virulent.
ARMS RACE
“There has been a bit of an arms race between vaccine control and keeping signs of clinical disease at bay,” says Mike Clark, avian veterinary advisor at Boehringer Ingelheim. “Over the years the field virus has altered and has become more virulent. “What we do in the way of control – not just vaccination – has got better and better, but we have seen an escalation in virulence of the virus.”
Richard Jackson, clinical director of St David’s poultry team, says he had experienced a small increase in MD prevalence among organic and free-range broiler flocks. But he says it is not certain whether this is a reflection of a general increase in the disease or whether it was linked to growth in that part of the market, and therefore the number of flocks on the ground.
“One of the problems for farmers is when you have got MD in broiler birds you can’t really see clinical signs on the farm, so the birds look totally fine and then the farmer gets back a bit of paper from the abattoir saying there has been 5-10% condemnation,” says Jackson.
“Outbreaks are usually quite sporadic, so it is difficult to gauge the prevalence of the disease itself,” says Alex McDaniel, veterinary advisor at Boehringer Ingelheim. “Certainly, from our experience, there seems to be an increase.” Some areas of the country are more badly affected than others.
“My own experience is there is a geographical predisposition,” says Jackson. “For one of the sets of cases I’ve been involved in, there was a lot of poultry in the area in extensive systems. The flipside is on the layer side; you can have a farm completely isolated with no poultry around it and bizarrely, they have got MD. It does tend to baffle you. “My thoughts are the virus is probably quite prevalent across the UK at low levels but it is where this viral load is in conjunction with a combination of stresses that the disease occurs. It is probably more widespread than we think.”
IMMUNOSUPPRESSION
One of the main difficulties associated with MD is diagnosis, because birds often present as immunocompromised initially, and MD may not be the obvious cause. “Clinical MD is really the tip of the iceberg,” says Keith Warner, head of poultry health and welfare and agricultural assurance at Avara Foods.
“If we have broiler breeders with clinical MD, we can pick that up relatively easily; it is an infrequent event, but it does happen within the industry.
“The bit that we really want to know is how much of it exists in a sub-clinical fashion that has an impact. We see evidence on broiler farms where it would appear the birds are immunosuppressed. The reason for that immunosuppression is poorly understood but MD is one of the potentials. If you grow birds to an older age, you often pick things up in abattoirs, so you might start seeing tumours in skin, and you may see numbers of paralysed birds on farm.
The panel discussed what came to mind when thinking of an immunocompromised bird. Generally, birds that are immunocompromised will be more susceptible to other pathogens, such as coccidiosis, so you may see higher levels of coccidial lesions.


“The classic diseases that would lead to immunosuppression across a flock would be Gumboro disease or infectious bursal disease (IBD), MD and chicken anaemia virus. They are the three classics,” says Warner. “I have dealt with cases in the past where we were aware of MD in broilers and you have some really severe immunosuppression. These diseases can act alone or they can act in combination. Other impacts from immunosuppression may be higher levels of lameness and rejects in the factory.
“Whenever birds go through the factory, there is a small proportion carrying a bacterial load that makes them unfit for human consumption. “And you might see that inexplicably rise in the case of the birds being immunocompromised,” Warner adds.
VACCINATION
What is clear is that vaccination programmes against MD have been hugely effective since they became routine. John Hodgkinson, production director for Lohmann GB, says along with better quality housing, Marek’s disease vaccines have had a massive impact on preventing the devastating effects the industry experienced before the use of effective MD vaccines. “I represent the 170,000 layer parents we put down per year and the 28,000 birds we have on the rearing farms. And we are not seeing any signs or conditions connected with Marek’s at all.
“All of our layer parents are now in new build facilities and that offers a great opportunity for good biosecurity and optimal cleaning and disinfection at turnaround. The breeder team have done a cracking job; the quality of the day olds coming to the farms, and therefore the health status of the chicken, are already in a good place and these are positives.
“From the breeder perspective, the day old mortality now has dropped dramatically. We are rearing through 0-16 weeks with 1% mortality. It is a phenomenal change in the health status of the birds coming into the farms where we were seeing 3-4% mortality in the first week. With any vaccination programme, if the chicks you have coming in are poor quality, it is always going to have that knock-on effect on health status going through the flock.”
LISTLESS BIRDS
Hodgkinson has, however, experienced MD, and describes his experience of an outbreak among broiler breeder rearing birds several years ago. He says the birds were around five to six weeks of age. “We started seeing some changes in feed refusal; they weren’t necessarily eating their food. Then we saw a rise in a few culls, we saw a few birds that were a bit listless, not happy. Then there was one bird we saw with the classical signs of bilateral wing and leg paralysis, and we then thought we’re dealing with something different. 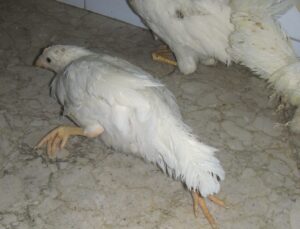 June 22, 2022
We use cookies on our website to give you the most relevant experience by remembering your preferences and repeat visits. By clicking “ACCEPT ALL”, you consent to the use of ALL the cookies. However, you may visit "Cookie Settings" to provide a controlled consent.
Cookie SettingsREJECT ALLAccept All
Manage consent