Phytogenic feed additives are a group of natural substances derived from herbs, spices, other plants and their extracts, and are so much more than simply essential oils. These natural bio-active compounds comprise many different active ingredient groups, such as pungent substances, bitter substances, essential oils, saponins, and flavonoids.

And not only are phytogenic feed additives (PFAs) adding a new layer of precision and efficiency to poultry rations by ensuring that nutrients are available to the bird through supplying enzymes that support digestion, but they are also aiding transportation of these products from the intestines and into the bird’s blood supply that, ultimately, support growth and egg production.

Another vital and important feature of PFAs is their role in improving feed utilisation and reducing nitrogen losses, as well as lowering GHG and ammonia emissions. With all this in mind, are PFAs replacing some of the synthetic feed additives in poultry rations? “They certainly show interesting and complex modes of action in animal nutrition compared to synthetic, nature-identical substances,” says Cargill’s poultry specialist Daniel Palcu. “This advantage is based on the synergistic effects of all components within a plant, which have not been reduced to the effects of a single lead substance.”

He adds that the challenge – and the achievement of work during the past 30 years of Cargill’s specialist phytogenic specialist partner Delacon – is finding the right combinations of natural substances while fully exploiting the synergy among their active ingredients. Standardising the power of nature in feed additives with proven efficacy is key and this is what drives the development of new, more advanced PFAs.

Delacon’s technical support manager, Manu De Laet, agrees and says screening each active ingredient group is a long and complicated process. “We want our products to ‘enhance’ or stimulate a positive process or reaction, such as enzyme activity in the gut. And we have to ensure that they don’t actually suppress another key process at the same time.”

He explains that fundamental to the development of phytogenic – or plant-derived – additives has been a much more detailed knowledge of the population of micro-organisms in the gut. “This has included characterising these micro-organisms and developing new techniques that will influence their actions. We have been able then to take advantage of these phytogenic products that can be very specific in their action in the gut of poultry.”

In the poultry sector, PFAs have been shown to support the maintenance of intestinal resilience and promote performance. “Including phytogenic additives in poultry diets also has implications on bird welfare, food safety and environmental issues,” adds Palcu. “And when used as natural performance enhancers, PFAs can improve nutrient utilisation, stimulate enzymatic activity and have been shown to reduce the pathogenicity of several bacteria due to the quorum sensing inhibition. PFAs have also been shown to reduce ammonia, methane and other greenhouse gas emissions.” 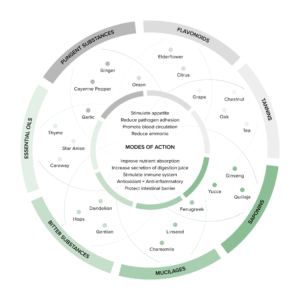 Biostrong 510, developed by Delacon, is the ‘big’ phytogenic feed additive in poultry. This PFA is widely used in poultry production and it has been shown to enhance the performance of laying hens with an improved feed conversion ratio of at least 2%, increased laying rate, egg weight and mass and better shell quality. Trials were carried out across flocks comprising more than 100,000 layers and included Lohmann Brown, Hy-Line W36 and Isa Brown breeds.

The birds were between 22 and 54 weeks old and fed a balanced diet, based on wheat or corn. Results from the control groups were compared with groups where Biostrong 510 was included throughout the entire production period at a rate of 150g/tonne of compound feed.

The overall results showed an increase in intake of +0.3% and an improvement in feed conversion ratio of 2.1% among birds fed the PFA. Birds also showed a 1% improvement in laying rate and a 2% increase in egg mass. And it was also shown to reduce noxious gas emissions, particularly ammonia from poultry faeces, with results from trials demonstrating reductions in NH₃ of up to 50%.

“Producers face an uncertain future in some countries, with many governments prohibiting the construction of further sheds, with projects shutdown or frozen, if producers fail to demonstrate that they are taking steps to effectively reduce nitrogen emissions,” adds De Laet. “So PFAs that can help to maintain bird resilience, productivity and growth efficiency – and reduce emissions – have an important role to play in the sustainable future of the poultry industry.”

Key here are the plant-derived substances called saponins, which are part of the PFA ‘universe’ (see Figure 1) and are found in Biostrong 510. These improve nutrient digestibility and also reduce the level of nitrogen in solid faeces and inhibit the activity of urease enzymes; both factors that are responsible for CO₂ and ammonia emissions into litter and the air with urease enzymes being particularly bad for the environment – both inside poultry housing and outside.

Improved nutrient digestibility and inhibiting urease activity can reduce ammonia emissions by up to 50%. In trials, crude protein (CP) digestibility varied between 74.8% and 81.9%, averaging 78.5%. “That means that, typically, 21.5% of CP is lost to the litter and the environment,” says De Laet.

He explains that if a PFA is added to improve the birds’ ability to digest and utilise the CP, these losses are significantly reduced. In trials, average CP digestibility increased from 78.5% in the control group to 82.3%, where Biostrong 510 was fed on top. “So 17.7% of CP was excreted.

In a 40,000- bird broiler house, with the same 38-day performance parameters, 5,522kg of CP would be lost and that’s equivalent to 884kg of nitrogen – 189kgN less than the control and a 20% saving. And there was also an average reduction in ammonia emissions in broiler flocks of 28%.

So poultry producers looking to improved feed efficiency and broiler performance, and laying rate, egg size and quality, should take a closer look at PFAs. “There’s no doubt that they can help to improve profitability and there’s also a consumer benefit, through the use of safe and natural products within the food chain,” adds Palcu.

These additives also reduce flocks’ reliance on antibiotics and there are also definite environmental benefits to be had. And, as the research and development continues, I have no doubt that there’s more to come and more benefits to pass on to poultry producers to improve performance and sustainability of the industry.”