New studies have shed light on how best to protect broilers

Different strains of E. coli are ubiquitous through the poultry population, forming part of the normal intestinal tract flora of birds. So why do they sometimes go almost unnoticed, but at other times lead to serious disease? “If you have a very healthy flock, E. coli might not cause too much of a problem but if there is another disease present, or any other kind of stress on the birds, you will start to see E. coli related diseases coming in,” says John Kenyon, Zoetis national poultry veterinary manager.

When this happens, there can be a major impact on performance with reduced egg output and broiler growth, increased lameness and mortality.

One of the biggest costs is in carcase quality – often with reject levels at the processing plant of more than 40% due to E. coli infection. In the past the solution was typically sought in antibiotics, but this is becoming less desirable and frequently no longer viable. “We’re very limited in terms of what antibiotics are available with a zero-day egg withdrawal,” says Kenyon. “There is limited scope in the commercially available antibiotics that will be effective against E. coli. “

“When you test for sensitivities with the E. coli strains isolated on the farm, it is not uncommon to find that E. coli will be resistant to all of the active components in available zero-day egg withdrawal antibiotics. You don’t want to give them something that will mean you throw away eggs for seven days.” Good hygiene at the hatchery and on the farm plays a vital role. Increasingly today the industry is looking towards vaccines. Traditionally autogenous, inactivated vaccines have helped to protect against specific E. coli strains.

Then eight years ago a new modified live vaccine was developed during a 16-year research programme at the UK Animal Health and Veterinary Laboratories – the former Central Veterinary Laboratory – at Weybridge, Surrey, introduced by Zoetis as Poulvac E. coli, based on an 078 strain but also offering cross protection against other serotypes. Today in the UK this vaccine is widely used in rearing breeding stock and a significant proportion of the layer flock, and it has been used very successfully in turkeys. “Generally two or three vaccinations are carried out during the rearing period to provide long-lasting immunity,” says Kenyon. 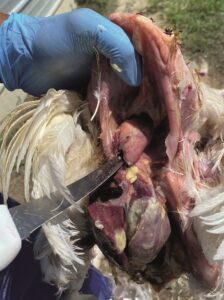 The vaccine is now attracting increasing interest for its potential to protect broilers in the UK. It is extensively used in countries including the USA and South Africa, where veterinary surgeon Nicolette Love had experience of the vaccine before moving to the UK as Zoetis product manager for poultry and pigs. In field trials with almost two million broilers, vaccinated birds had fewer mortalities and better feed conversion, weight gain and final bodyweight, she says.

Vaccination was also associated with lower incidence of airsacculitis and fewer condemnations at processing. “Using a live E. coli vaccine is one strategy helping producers manage the pathogen while meeting the growing demand for poultry raised with minimal or no antibiotics,” she says. “Historically, live vaccination was only used on ‘problem farms’ but the results of our study demonstrate an economic benefit even on farms with normal levels of E. coli challenge.”

A new UK study by Dr Allan Ball, director of Slate Hall Veterinary Services, was carried out on 1.25m broilers across two farms. This showed the benefit of the Poulvac E. coli vaccine across four performance parameters for three consecutive crops – mortality down from 8.18 to 4.78%, farm rejects down from 1.00 to 0.89, feed conversion lower by 0.08 and average age at processing 1.8 days fewer.

“Our experience using the vaccine in the commercial field has shown a delayed response with the significant improvements in the third crop,” says Dr Ball. “It serves as a superb supporting approach moving into the autumn and winter when the incidence of E. coli infections start to increase but also getting maximum benefits in the midwinter crops.”

He recommends carrying out vaccination before there is an E. coli challenge instead of waiting for E. coli to colonise the birds. “Birds need time for their immune system to develop an immune response,” he adds. “If the infection progresses from the acute to the sub-acute and chronic stage, the response to vaccination won’t be as effective.” With broilers the vaccination is generally given as a coarse spray to day-old chicks on the farm.

“I’d like to see it used in UK hatcheries, as they do in many other countries,” he says. “The hatchery is a nice control point, you’re spraying chicks destined for 20, 30 or 40 different farms. So if you’re getting the hatchery application right, you’re getting that right across 40 farms.