Hannah Elliott, Lallemand Animal Nutrition, highlights the fundamental roles played by microbes in the gut
The microbes in the gut are composed of thousands of different strains and species of bacteria, yeasts, viruses and archaea. The gut microbiota includes a majority of commensal species as well as potential pathogenic ones. Each part of the poultry digestive tract offers a different habitat in terms of nutrients and pH conditions but also feed retention time.
From the crop to the caecum; the composition, concentration and diversity of the microbiota is highly variable. However, in birds, microbiota diversity is fairly  low when compared to bigger animals, probably due to the short transit time.
Typical retention time for a  29-day-old broiler is between four to five hours compared to humans, where the average is 20 hours. Establishment of the chick’s microbiota takes several days after hatching, a time when the birds are particularly sensitive to enteropathogen contamination. The primary roles of the microbiota are: to aid in digestion to safeguard the organism against pathogens and reinforce immunity.
Fragile ecosystem
The poultry gut microbiota is a fragile ecosystem that can be disturbed by many factors, such as vaccination, pathologies, drugs, antimicrobial treatments, heat stress, sexing, feed transition, building changes, etc. A method to assess the equilibrium of the gut microbiota at farm level is to analyse the fecal microflora and look at the ratio between two bacterial populations: one beneficial, such as Lactobacilli; and the other, a potential risk, such as coliform. 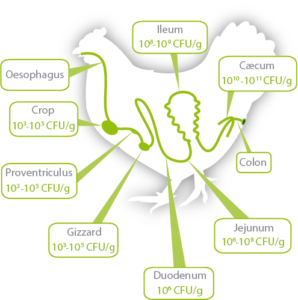 Fecal microflora analysis can be a good indicator of a flock’s health status. It has been shown in various conditions that feeding selected probiotic bacteria to poultry helps improve the ratio between lactic acid bacteria and enterobacteria populations.
Energy metabolism
Did you know that up to 30% of the energy in any poultry diet comes from its microbiota activity? About 55-70% of a poultry feed formula is made up of cereals, the major source of carbohydrates, hence energy, for the birds. However, only simple carbohydrates such as starch are digested through an enzymatic process in the small intestine. The major part of complex carbohydrates and fibres present in the diet cannot be digested by the bird’s enzymes.
Only certain micro-organisms from the gut are able to digest these. In the caecum, commensal microorganisms are able to hydrolyse the poly-, oligo- and di-saccharides into primary sugars. These are then further fermented into short-chain fatty acids (SCFA) and volatile fatty acids (VFA), which are mainly absorbed at the level of the caeca, providing additional energy to the bird. It is estimated that the part of total energy requirement for poultry coming from fermentation ranges between 5 and 30%, depending on the diet.
Supporting digestive function
The gut microbiota not only takes part in energy metabolism, but also influences the whole digestion process including intestinal absorption. The microbiota can be associated with:  Increased villi height  Improved micronutrient absorption Higher enzymatic activity The microbiota also plays a role in protein and lipid metabolism, vitamins and mineral absorption, providing some of the essential nutrients that the host’s own enzymatic system is unable to produce (vitamin K, for example). 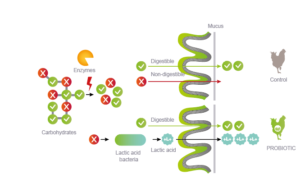 Practical implications
Many stress factors such as heat stress, sexing, feed transition, vaccination, pathologies, drugs, building transfer, etc. can affect the gut microbiota balance. As a consequence, growth and performance are affected. Recent research has shown that feeding poultry with specific lactic acid bacteria known to balance the gut microbiota is able to improve feed efficiency and energy metabolism.
The guardian of poultry immunity
The poultry gut microbiota has a significant influence when it comes to immune defences. The digestive tract represents one of the major sites of exchange between the animal and its environment. Enteric pathogens are an important threat to modern poultry operations. The gut is a major defensive site against the organisms. First, the animal is protected with its gut wall barrier and through the presence of many primary and secondary immune organs.
Triple protection
The gut microbiota plays a protective role in different ways. It has a barrier effect: by adhering to the gut wall lining, the commensal bacteria prevent colonisation by potential pathogens. This is known as competitive exclusion. In the gut lumen, various anti-pathogen strategies are linked to metabolism of the microbiota, such as the production of lactic acid, which acidifies the gut environment.
Such conditions prevent the development of most pathogens, which thrive under high pH (like coliforms and Salmonella). Other commensal bacteria also produce antimicrobial metabolites. The gut microbiota also helps play a protective role through modulation of the immune system.
An inflammatory state, which can be caused by stressful situations and pathogen pressure, has been linked to a drop of performance in poultry. Energy diversion towards the immune response means it is not being used for growth or egg production. Up to 30% of energy can be lost due to the activation and management of inflammation.
The supplementation of poultry diets with selected probiotic microorganisms, such as Saccharomyces cerevisiae boulardii, has proven benefits to the gut’s protective function and has been shown to reduce the fecal contamination with Salmonella spp. in broilers, for example. A well-balanced, healthy microbiota is key to preserving gut health in poultry production.

Comment: Falling into an avian flu protection zone is a constant worry