A combination of bacterial products has had a significant impact on a Gloucestershire broiler grower’s ammonia emissions, Lallemand has discovered. This article was first published in the Innovation supplement to Poultry Business in May 2021

Ammonia emissions are a widely discussed topic in the poultry sector, and they are cited as one of the main reasons why permits for new sites, or unit expansion, are refused. With legislation now in place to reduce emissions from poultry farms, it is not an issue that the industry can ignore.

Modern housing which has better ventilation and heating systems, has been shown to help reduce emissions, however many are still finding ways to make further improvements, as one Gloucestershire grower discovered.

After investing money in improving the house environment and focusing on bird gut health, he noticed a clear positive impact, albeit unintentional, on his ammonia emissions.

“Initially, the farmer noticed that when the contractor visited his 200,000 bird broiler unit at the end of the crop, they weren’t turning on the fans to clean out the house,” says Hannah Elliott, monogastric sales and technical support at Lallemand Animal Nutrition.

“His first thought was that there was a problem with the system and the fans weren’t working, but it was actually because there was no detectable ammonia in the air and they did not need to have them running.”

The farmer was using a combination of bacterial products designed to support gut health and promote the creation of a positive biofilm in the animal’s environment. However, after noticing the impact this combination was also having on his ammonia emissions, he approached the product manufacturers, Lallemand Animal Nutrition, to highlight the link.

With ammonia emissions having been routinely monitored in each of the poultry houses, Lallemand Animal Nutrition has been able to analyse a comprehensive data set from both before and after the introduction of Bactocell Drink and Lalfilm Pro, and it shows a consistent and significant trend.

Using a hand-held ammonia meter (ToxiRAE II (PGM-1191) Ammonia Gas Detector), ammonia measurements were taken from the same place in the four houses each week. Data has been analysed from the farm which covers 16 crops pre-treatment and 9 crops post-treatment. 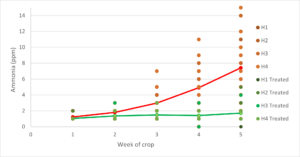 “Overall, while the usual weekly increase in ammonia gas levels within poultry houses due to bird growth and litter accumulation is still mirrored, the average level each week following the use of the treatment protocol – Bactocell Drink and Lalfilm Pro – is significantly lower.

As well as helping the environment, a reduction in ammonia is also beneficial for bird health and people in contact with poultry buildings. And, for those who are implementing ammonia reduction strategies, this data could provide an exciting insight into the role poultry microbiota has to play.

Pairing this approach with other strategies already in place for managing ammonia emissions – for example ensuring good ventilation and managing litter quality – could result in significant reductions.

“Keeping litter as dry as possible will help to reduce the development of ammonia gas, so make sure leaky drinkers are fixed and the house is properly heated and ventilated.

“The bird’s diet will also play a role in the formation of ammonia gas from the manure. Often this can happen if the bird isn’t properly breaking down and absorbing the protein in the feed. If you’re noticing ill-formed droppings, speak to your vet to identify whether it’s worth adjusting the diet to incorporate specific supplements which will promote good gut bacteria, helping the birds to utilise more of the available nutrients in the diet,” she says.

Poultry farm ammonia emissions are a complex issue in the industry, and with the growing demand for chicken meat providing diversification opportunities for a number of farmers, this will inevitably be an area of environmental focus going forwards. Although there is still a great deal of progress to be made, it’s worth exploring methods which have the potential to reduce emissions and can be easily implemented on-farm.