But as the nights draw in and the mercury drops, experts are warning producers to be on their guard and step up their biosecurity in the hope of avoiding another damaging outbreak. The UK has had disease-free status from the World Organisation for Animal Health (OIE) since September 2017, but Defra has warned there is an increased seasonal risk of avian flu from migrating wild birds in winter.

Analysts are particularly scrutinising weather patterns in Russia, with cold weather known to push migration further west towards northern Europe, and potentially on to the UK.

For farmers, the message is clear: the time to act is now, and nobody should take the country’s disease-free status for granted.  “We haven’t had an outbreak in the last two years and farmers’ level of consciousness  of it all is that it has finished and gone away,” says Julian Sparrey, director of Livetec Systems, whose business helps companies prepare for possible outbreaks. “But the disease hasn’t gone – it’s just waiting to come back and there’s a lot of complacency.

We tell people in the summer to do their work on biosecurity and I would advise people to start putting in more stringent practices now.” Máire Burnett, who chairs the Poultry Health & Welfare Group (PHWG), warns that, despite the current UK risk level for highly pathogenic avian influenza (HPAI) and Newcastle disease being low, the group is very concerned about the threat of migratory birds bringing a more virulent strain of H5N6 this winter.  “We need to be extra vigilant, because the wild water birds may have little or no protective immunity,” she told a PHWG bird  flu webinar this month.

Enhanced biosecurity is at the heart of ensuring the industry remains disease-free, or in the worst-case scenario is able to quickly contain any outbreak. Daniel Parker, veterinary adviser at the British Poultry Council, counsels contact with wild birds such as waterfowl and gulls should be minimised.

Feed spillages should be swiftly cleared up and rodent control is essential. Restricting visitor access is another important practice, and good record keeping is vital in case farms become infected premises or become caught up in surveillance or protection zones. 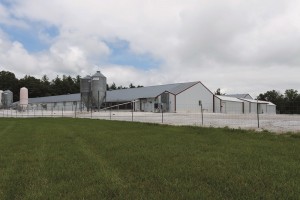 “Keeping gates closed, reducing visitors, making sure your boots are clean, managing the barrier systems properly, making sure you’re not just nipping into the control room to turn off an alarm without swapping your boots – these are all the little things you can do,” says Sparrey, who adds that having a gate is vital to stop people, such as delivery drivers or postal workers, wandering onto the farm without approval.

Mixed farms can find it a particular challenge to maintain good biosecurity protocols, he explains. Farmers should check whether they are in a designated high-risk area – which are typically areas close to wetlands and water bodies – as they may be required to put enhanced biosecurity measures in place during an outbreak, and keepers should also also register their birds on the Great Britain Poultry Register, or the DAERA Bird Register in Northern Ireland.

It is important to stay alert to signs that a flock may be suffering from bird flu, and Parker says these could include a drop in feed and water intake, lower egg production, lethargy, respiratory problems, swollen heads, diarrhoea or blue discoloration to the neck and throat.

If in doubt, farmers should seek veterinary advice as soon  as possible. Should there be sufficient cause for concern, a farm will be assessed by the Animal and Plant Health Agency (APHA), which includes restrictions on movement and laboratory testing.

If a virus is confirmed, a cull of remaining birds will begin, followed by a process of cleansing and disinfection. The farm will then enter a legal agreement with APHA, with most expected to select a process of secondary cleansing and disinfection to UK and EU standards, which allows sentinel restocking 21 days after completion and the country to reclaim OIE disease-free status after three months.

Many of the steps that can be taken to reduce the chances of an outbreak are straightforward, but Sparrey believes technology will increasingly help, too. “We have a client who is looking at putting in automatic number-plate recognition to register the lorries crossing the biosecurity control point, and you could  have RFID tags on shed doors to tell you who has gone in and out,” he says.

“One of the big things about a disease investigation is the traceability, and knowing who has been into the sheds and had contact with the birds. This, though, relies on the visitors’ book, and delivery drivers often won’t sign one. But if you have an automated recording system then you don’t have to worry about that. Then there are things such as electromagnetic locks on the sheds and automatically opening gates – all this technology is coming, and people are already looking to incorporate  it in new-builds and renovations.”

Technology aside, NFU chief poultry adviser Gary Ford stresses that farms should take out adequate insurance to mitigate the potentially huge financial impact on a business of any outbreak, as the seriousness of HPAI is clear. As well as untold misery and stress for the farm that falls victim to the disease, the repercussions can reverberate across the industry for years to come, as demonstrated by the fact that China and South Africa are still not importing British poultry despite the country being AI-free since September 2017. UK poultry has been free of AI for two  years now, and industry leaders hope that  by keeping minds focused on good practice, that the clean bill of health will continue for the winter ahead.

Highly pathogenic avian influenza (HPAI) is a worldwide problem, affecting countries as diverse as Afghanistan, Bhutan, Congo, Iran and Mexico, all of which have reported incidences over the  past year. In fact, as many as 68 countries and territories have suffered at least one case of bird flu in recent years, the majority of which were in the northern hemisphere.

HPAI was last confirmed in the EU on January 4, 2019, in a wild bird of prey in Denmark, with the H5N6 subtype closely related to other viruses detected during 2017/18 in wild birds.

Bulgaria has also been monitored this year following identification of H5N8 in late 2018. Globally, HPAI outbreaks resulted in the loss of around 122 million birds from January 2013 to August 2018 [OIE], with more than half occurring in Asia and 12% in Europe.

Meanwhile, Newcastle disease, which affects chicken as well as other captive and wild birds, hasn’t been recorded in Britain since 2006, and the risk level is currently low. However, there were cases of Newcastle disease reported in Belgium, the Netherlands, Luxembourg and Sweden in 2018. Therefore, farmers are urged to be vigilant to the signs, which include respiratory problems, nervousness, watery faeces, depression and a lack of appetite.

A good biosecurity programme is essential to keep harmful pathogens out of any flock. Vital to biosecurity is a rigorous procedure for cleaning and disinfecting the farm at turn-around period, ie, between flock placements. Kevin Stebbings, Aviagen UK technical services manager, shares advice on the top three turn-around hygiene essentials.

The first step towards optimum farm hygiene is a tried-and-tested programme for cleaning and disinfection between flock placements. A useful tool is a written procedure  for all staff to follow, including deadlines and clear action points for specific personnel. That way, all will understand their role and responsibilities. 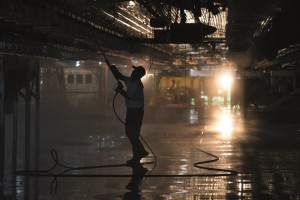 In the procedure, make sure to provide detail on the areas to be cleaned and disinfected. For example, cleaning the feed silos on a regular basis helps to prevent build-up of mycotoxins from passing to the next flock. Making sure the direct area around the house perimeter is free from vegetation to deter pests and rodents, and having an effective rodent control programme in place helps to control the spread of harmful disease.

I also recommend seeking advice from a veterinarian on the best disinfectant that suits the unique conditions on a farm. It is important to ensure the disinfectant and detergents used for cleaning are compatible to maximise the efficiency of the cleaning and disinfection process. After disinfection, all staff should behave on the empty farm as if there were birds on site. Thus, be sure to follow all biosecurity and hygiene practices – such as setting up new foot dips and ensuring boot changes.

STEP 2. CARRY OUT  A VISUAL INSPECTION

Once cleaning and disinfection have been completed, the next step is to carry out a visual inspection, checking for any visible debris, dirt or organic material in the house:

* Carefully look at joints and cracks in the floor.

* Finally, a thorough microbiological monitoring and sampling programme helps you to review and assess the success of  the cleaning and disinfection process, and also to make further improvements to the hygiene programme.

A chemical supplier or veterinarian should carry out the sampling. This will include water systems, walls, floors, air inlets, feeders and drinkers, with special attention to the obvious hard-to-clean areas (such as joints and cracks) that can harbour bacteria.

STEP 3. OFF TO A SAFE START

Getting your birds off to a safe start in a biosecure environment is an important step towards protecting their health and welfare. An effective hygiene programme between flock placements, followed by  a visual inspection and ongoing farm monitoring, will help to keep out bacteria and other harmful pathogens, giving your birds a clean, safe environment in which to live and thrive.